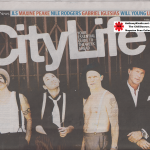 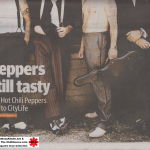 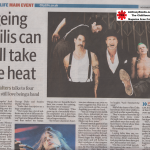 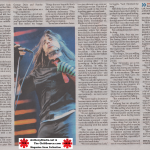 Los Angeles’ funk rock finest Red Hot Chili Peppers may be heading over the proverbial hill, but there remains something endearingly anarchic about these middle-aged music legends.
Sitting in a Santa Monica hotel, looking out over a sun-kissed beach, the latest RHCP line up – which now includes youngest member and guitarist Josh Klinghoffer following the departure of exhausted John Frusciante two years ago – natter and laugh like teenagers still enjoying the novelty of band life.

“We’re very lucky,” says the band’s bouncing bassist Flea. “We’ve made bunches of money – we don’t need to think about that.

“We could be sat on the beach eating burritos and hanging out, but even when we’re ****** off or our egos are hurt we sit in a room and work. We do it every day.”

It’s true; 27 years in the business and the Chilis are here to talk about another new record, I’m With You, and their first world tour in four years, one that will keep them on the road well into 2013. It’s a gruelling schedule, but Flea can’t get enough.

“I’m going to take the album to an air force base and play it in zero gravity,” he enthuses, all Bill and Ted-style California sunshine. That, CityLife can only agree, sounds like a bodaciously excellent adventure.

I’m With You owes a great debt to Flea’s distinctive talent for making jazz sound cool. His basslines – just like singer Anthony Kiedis’ juvenile lyrical banter – refuse to slow down or grow up, and their playfulness on I’m With You in particular compensates for the absence of Frusciante’s flair with a six string.

There is, Flea is happy to concede, something a bit more space jazz than usual about the album. “I love jazz guys like George Duke and Stanley Clarke,” he says.

“I take that description as a huge compliment.

“Our music has a lot of subtleties and a lot of different elements. Under repeated listens you’ll get new things all the time and that makes me happy. Things that are beautiful don’t have one reason for existing, they have lots of reasons.”

Anthony elaborates: “Flea grew up in a household where his stepfather was a jazz bass player. He introduced Flea to the idea of improvisation.

“So we have a hardcore American jazz element to us, even our name suggests that. That side of us is expressed on this record. Anything goes with our band.

“You can bring in heavy metal, jazz, disco, industrial; we can find a place for anybody. Anything works. Everything’s us. Maybe not show tunes.”

A broad musical approach has sustained the band as original recording artists for almost three decades. From their major label eponymous debut through to their breakthrough album, Blood Sugar Sex Magik, seven years later, and still further to their catalogue of chart toppers – One Hot Minute, Californication, By The Way and Stadium Arcadium – they have done punk, funk, pop, massive ballads and rock anthems.

It’s a natural evolution for band growing older – if not growing up – in the public eye, says Anthony. “In 1985, the music we were doing was very intense. It was coming from the end of the LA punk scene – and that was full on and violent and aggressive and wild.

“But we took the tightness in our groove and musicality very seriously. We worked very hard to make it a cohesive thing that could blow your ******* face off.

“We took the rhythmic concept seriously – we were never slapdash.

“We never made a decision to become more suitable, the audience slowly accepted us for who we are. But we really were crass and brash and unpalatable for the masses then.

“At our signing party at the Roxy in 1985, my girlfriend – who looked like a canary who had become a peacock – came out in the middle of the set while I was dancing with this naked girl.

“She hated that, so she climbed on stage, punched the girl out then threw me down and tried to kick me in the *****. But I would not stop singing! I would not let the band down.

“We were playing Foxy Lady,” he laughs. “And I finished the song.”

Half of the charm of the Chilis has always been their ability to get back up after a good kicking.

They’ve endured more line up changes than most, come through more hell-raising days and rehab stays that many and faced more critical abuse than they probably deserved.

But nothing keeps them down for long.

Losing John, they say, certainly had an impact on the band. But having John’s understudy Josh step into his shoes have give the Chilis another new start.

“On this record I felt incredibly inspired the entire ******* time,” says Flea.
“The thing is, ‘Are you willing to get in and work and roll up your sleeves?’, and that’s what you do.

“Igor Stravinsky sat at his piano every ******* day. Some days it was boring and rubbish and his wife was chewing his ear off – it was mundane. The same thing goes for Nick Cave. He goes to work! Every day.

Anthony has an altogether more Californian explanation: “It’s like surfing when there are no waves you have to get out there and paddle and be strong and ready when the big waves comes.

“Sometimes you don’t feel the cosmic thing, but you have to keep your chops good so you’re ready to ride. Take it like a job.

“That’s why it’s hard for bands to maintain and stay relevant over many years because sometimes it’s not fun, especially if you’re successful.

“Josh has influenced the hell out of everything on this record; he influences my vocals too. He has tipped the chemistry.

“He’s changed all of us, but, at the same time, there’s an obvious thread from who we have been and who I have been. He’s challenged my brain.
He’s made me grow a bit.”

Josh smiles. “At the core it’s just four people playing together,” he says. “If I think about the hugeness of it, it triggers anxiety!”

Life as a live band, though, is still what excited the Chilis. Not the bigger picture – being a global success story and making millions; it’s a nice side effect, but it’s not the goal, says Anthony.

“It’s still one night only – that’s what it feels like!” he explains.

“That’s why it happened. We never thought about being a rock and roll band. We only wanted to play one night, that’s how we keep it alive.”

Flea agrees: “I try not to think about another 30 years.

“I met Anthony when I was 15. We hit it off straight away.

“We did mad **** and got into a lot of trouble, but we always had our own ideas and kooky concepts.

“We constructed our own ways of thinking, our own way of being friends and how we wanted to fit into the world. That’s how this band started.

“When I was a kid I was a criminal, I robbed people. But there is always an idea of what integrity meant to us and what we thought was right, what was sacred and what was true.

“We’ve always adhered to our code of finding that magic and honouring it.
“More than anything else, that’s the true guiding force for our band.”