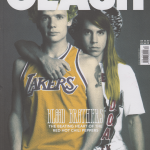 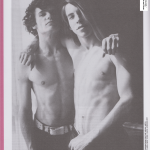 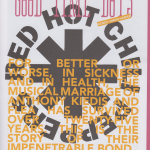 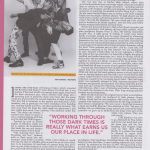 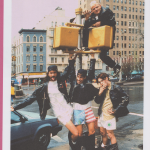 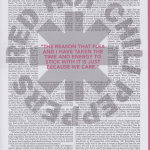 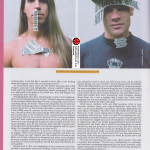 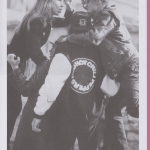 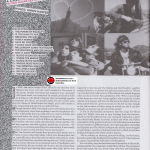 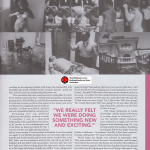 Please note: The cover image on the original magazine is ‘grainy’- it’s not the scan! Sorry but we don’t have  full transcript of this magazine yet- this is an extract.

By 1991, the self-titled debut album by the Red Hot Chili Peppers was seven years old, and it sounded it. The ascent of the group, though promising and peppered (pun intended) with great tunes, was hampered by modish production skills by producers who failed to harness their increasingly popular and fantastic live shows, and quickly dated. It’s now twenty years since the release of ‘Blood Sugar Sex Magik’, and it still sounds as fresh, invigorating and relevant as it did back then.

The Eighties were an uphill struggle for Anthony Kiedis and Flea: each successive album had seen a different line-up for the group (a steady rotation of drummers and guitarists) and progressively more sales, and finally, just as they felt comfortable in the company of original school friends and band founders Hillel Slovak and Jack Irons (on guitar and drums, respectively) for 1987’s ‘Uplift Mofo Party Plan’, a year after the album’s release, Slovak fell victim to the heroin addictions that plagued him and Kiedis. With Irons leaving to grieve, the duo, intent on continuing, had no choice but to recruit new blood.

John Frusciante was just eighteen when he took up guitar duties for the Chili Peppers in 1988, hired just months before Chad Smith was installed as drummer. With little time to waste, ‘Mother’s Milk’ was dispatched; though clearly a move towards the direction of the mainstream, more than anything it was the foundations of creative relationship that was really about to come to fruition, and henceforth define the ‘classic’ formation of the group. By the time it came to write its follow-up, the bond between the four was firm and fruitful. “We were really a band by then,” Chad confirms. “We had been together, travelled together, played lots of concerts… We really felt we were doing something new and exciting. It was just a really fun time. It came so easy, and there was so much music.”

Def Jam founder and Beastie Boys producer Rick Rubin was at the helm to rein in the band’s ideas, which were flowing thick and fast, especially due to the advanced innovations of Frusciante. “John really found himself as a musician during that era,” Kiedis explains. “He was always this kind of uncontained storm of intelligence and talent and desire. No-one worked more hours in the day at practising their instrument and learning about music than John, but he was kind of undefined during ‘Mother’s Milk’, and I think that experience of working with a producer who wanted him to be a certain way, that wasn’t necessarily who he felt he was, drove him even deeper into wanting to express the true nature of his music. And I think that sort of blossomed deeply in ‘Blood Sugar Sex Magik’, where he just found his voice as a guitar player and a singer; he let it show.”

The band decamped to a mansion in the Hollywood hills, which was turned into a giant live-in studio. Reportedly haunted, it’s also supposed to have housed The Beatles and Jimi Hendrix; a perfect setting, therefore, to channel the gods and create music in. “Where we recorded really relieved a lot of the tension that usually happens when you do a record,” Flea admitted in 1991. “When we recorded in this house we were also living together, which made for a really relaxed environment, and that was the key to the album. The key to being a great band or a great musician is to be able to relax enough so you can be aware of what’s going on around you and it can flow through you and you can pick up all the energy.”

It was in this familial atmosphere that the songs for ‘Blood Sugar Sex Magik’ were put to tape. Footage from the sessions, filmed by Flea’s brother-in-law, was eventually released as a short film called Funky Monks. It reveals, in black and white, the evident camaraderie of the quartet (and crew), the individual contributions of each member to different tracks, their listening habits (including Led Zeppelin and The Velvet Underground) and the inner thoughts of each Pepper, courtesy of intimate interviews, which reveal their feelings throughout the whole creative process.