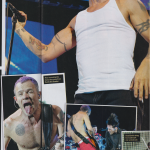 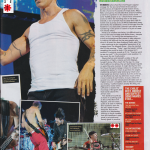 Five minutes before the Red Hot Chili Peppers appear on stage for the second of their three sold out performances at England’s largest indoor arena, the O2 is home to thousands of empty seats. Why? Well, some genius has decided that anyone holding a ticket for anywhere in the arena’s lower bowl-some 10,000 people or so-should have unreserved access to either the standing area or the seats. Outside a sea of people wait to swap their £49.50 tickets (not as pricey as a £70 RHCP basketball jersey) for wristbands. Some 20 minutes into the headliners’ set, bemused customers can still be seen wandering in the gloom for a pair of seats not already taken.

Amid such mindless confusion, it’s difficult not to look at the band onstage- despite them, in fact- for being the centrepiece of an arena rock experience that seems to take pleasure in making life difficult for the very people who allow it to exist. But then Anthony Kiedis asks Flea- who continues to do a passable impression of an escapee from The Muppet Show- how he reached the O2 this evening. “Tube,” says the bassist, before revealing the
route he took. If his answer isn’t truthful, it certainly sounds as if it is. “Anyone want to see my cock?” is the musician’s next question. In the room, the ice finally melts.

Playing before and beneath a state of the art production of lights, screens and LCD displays, tonight’s show offers much for the eye. In a way that’s difficult to define, the set itself doesn’t ignite in quite the same manner. It might be for the first hour that the band onstage refuses to accede to the audience’s desires for them to perform hit singles, stubbornly and admirably sticking to newer and (relatively) less familiar material. But this
is the O2, not Sheffield City Hall; by definition much of this crowd consists of part-timers. As such, when the second hour sees the introduction of tracks such as Higher Ground- complete with its fabulous trash out ending- Californication and By The Way, the appreciative noise seems sufficient to loosen the moorings of the giant tent that stands above this arena’s roof.

Few bands are quite as at home in a setting such as this as Red Hot Chili Peppers, and few seem quite as at ease in making their audience wait for the set’s better known treasures. But as this applies to A Wednesday evening in South London, here the headliners’ were great in principle and merely good in practice.