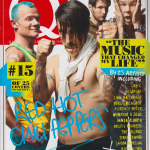 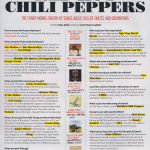 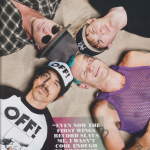 THE FUNKY MONKS. DRIVEN BY SONGS ABOUT ROLLER SKATES AND GRUB WORMS.

How are you, how’s your day been?

What was your first musical memory?

Josh Klinghoffer: When I was five I got several cassettes of

The Beatles and The Beach Boys. Then, when I was eight, I got the Sex Pistols’ Never Mind The Bollocks.

CS: My brother’s record collection, when I was six or seven. He had all the late-’60s/early-’70s English hard rock and blues bands like Humble Pie, Queen, Led Zeppelin, Deep Purple, Cream…That was a fertile period from 1969, when I was seven, to 1973. My brother played the guitar, and I’d started to play the drums OK, so we began playing in a band together called… Rocking Conspiracy! It was right around the time of Watergate and all that shit – we were very controversial.

What was the first record you bought?

CS: A 45 called Groovy Grubworm by Harlow Wilcox & The Oakies. It was an instrumental jam, and right in the middle it stopped and the guy went, “I’m a grubworm!”

AK: Neil Young, Heart Of Gold. I lived in Grand Rapids, Michigan. In its own special way I guess it did shape me a little bit. It wasn’t like I ever wanted to emulate that sound, but it just was a song that got to me. The other one was Melanie’s Brand New Key -I bought them on the same day.

Where do you go from Neil Young and Brand New Key?

AK: See, most of the music I listened to from five till 11 was AM Radio. I lived with my mom. She played Carole King, which spoke to me. I also have a memory of being profoundly affected by Edgar Winter’s Frankenstein – my radio went off in the middle of the night and it was playing. The other thing I heard was Wings. I loved them: I didn’t know anything about the history or the politics of The Beatles, and I wasn’t cool enough to gravitate towards John Lennon. Even now that first Wings record [1971’s Wild Life] slays me.

What was your first gig?

CS: Blue Oyster Cult at Pine Knob Music Centre, Detroit, 1975. The reason I went was that Kiss were supposed to open for them and I was obsessed with Kiss when I was 13. Anyway, they cancelled – Gene Simmons had a herpes outbreak or something. So Michael Quatro, Suzi Quatro’s elder brother, opened the gig. I actually ended up playing drums with that guy.

Who was your first inspiration?

AK: It wasn’t one single person. Iggy Pop, David Bowie. I saw a Bowie concert in the early ’70s that was absolutely magical. I never wanted to be like him but I was in love with what he was doing. I actually didn’t feel like making music until the early ’80s when I started listening to some hardcore funk records that were coming out by bands like Defunkt and Grandmaster Flash And The Furious Five. That’s when it dawned on me that I might be able to do that – particularly when I heard Grandmaster Flash.

What’s the most embarrassing record you own?

CS: Tainted Love by Soft Cell. I like some pretty sappy Chicago songs, too.

And the record you couldn’t be without?

JK: At this point I’ve determined that Veedon Fleece by Van Morrison is my favourite record of all time. I love it from start to finish; it’s perfect.

Last time a piece of music reduced you to tears?

F: It was about a month ago. I was walking along the beach at Big Sur listening to the Ruff Draft EP by [late Detroit rapper/producer] J Dilla. It was a really powerful experience – so beautiful it made me cry.

What is your karaoke song of choice?

JK: Oh! Give It Away… by the Red Hot Chili Peppers.

One lyric you wish you’d written?

A K: God, there’s about 500. I can listen to any Bob Dylan record and go, “I wish I had that ability to talk about life in the way he did.” He and his predecessors – like Woody Guthrie. Early rappers like NWA – not that I can relate to their common experience; I just like their honesty.

What’s your favourite record of the past 25 years?

CS: I really liked Guns N’ Roses Appetite For Destruction. Right when I moved out here to California, they were just starting to blow up. I would go to clubs on the Sunset Strip and see Axl Rose and Slash hanging out. I liked their whole refreshing attitude. John Frusciante loved that record, too, so we were able to bond over it.

And what song will be playing at your funeral?

F: I’ve always said in the past that Bold As Love by Jimi Hendrix would be the song. But of late I’ve been having a few other thoughts… something by [bebop-era jazz singer] Babs Gonzales And His Three Bips And A Bop would be great.