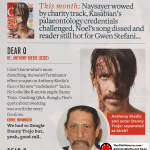 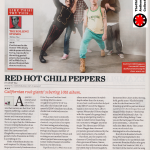 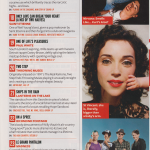 Their 10th album ditched its acid-inspired Dr Johnny Skinz’s Disproportionately Rambunctious Polar Express Machine-head working title for a more straightforward I’m With You and, after the bloated 28-tracksprawl of 2006?s Stadium Arcadium, clocks in at a relatively concise 14 songs.

Flea, a man more commonly associated with cock-socks than classical compositions, has spent the intervening period studying music theory and learning piano. Perhaps touring as a member of Thom Yorke’s Atoms For Peace and working on yet another Damon Albarn project have encouraged the rubber-limbed bassist to bend his brain in new directions.

Significantly, the Red Hot Chili Peppers’ I’m With You is an album more interested in subtle depth rather than the instant, titanic funk-rock hooks that helped make RHCP one of the biggest bands in the world. Sure, album opener Monarchy Of Roses begins with the squeal of a garage band tuning up and getting ready to make a racket before launching into a Stones-y swagger, and lead single The Adventures Of Rain Dance Maggie has a lean and propulsive groove bolstered by the savvy deployment of a cowbell.

But these, and the urgent rock clamour of Goodbye Hooray and disco grooves of Dance, Dance, Dance are the only moments where the Red Hot Chili Peppers play to the arena gallery. With its synth, brass and tom toms, Did I Let You Know sounds like Friendly Fires on steroids. There’s more ’80s white-funk on Look Around, its middle eight reminiscent of Duran Duran’s Rio.

Maybe life-changes have dampened the Red Hot Chili Peppers’ ardour for big, bold, goofy tunes – Anthony Kiedis became a dad for the first time in 2007, breaking up with his partner almost a year later. In the introspective and languid Police Station – Steely Dan mixed with Radiohead’s Just – Kiedis sings with aching feeling: “I saw you on the back page/Of some free press yesterday…”, while the reflective Meet Me At The Corner seems to chronicle the disintegration of a relationship.

Best of all is Brendan’s Death Song. The soaring ballad is the band’s tribute to ex-pat British club promoter Brendan Mullen who gave them their first break in 1988. It’s the heart of the matter, and the song that sets the bar for I’m With You’s tone of more sophisticated, sombre pleasures.