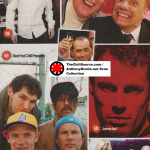 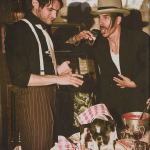 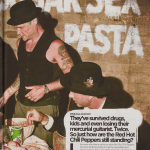 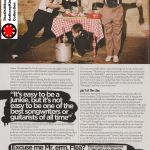 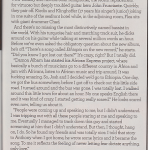 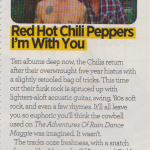 They’ve survived drugs kids and even losing their mercurial guitarist. Twice. So just how are the Red Hot Chili Peppers still standing?

Like many people who dine at rock’s top table Red Hot Chili Peppers frontman Anthony Kiedis thought he was bullet proof when it came to drugs. The 48-year-old’s tales of addicted debauchery have long been chronicled tutted over and mythologised. There were the week long heroin binges in LA motel rooms. There was the time when his drug reservoir ran dry as did his bank account. In desperation to scoreˏ Kiedis frantically flogged a guitar signed by the Rolling Stones worth thousands. In returnˏ he received enough cash to get high for about 10 minutes.

In fairnessˏ it was all he knew. As a pre-teen in ‘70’s Los Angelesˏ he watched his father Blackie Dammett- one of Hollywood’s go-to drug dealers-claim Led Zeppelin and Keith Moon as satisfied narcotics clients. He was used by his old man as a muleˏ smuggled onto planes with cash strapped to him after Dammett completed successful drug runs. Then at 14ˏ he shot coke for the first time. “Twenty seconds later” he recalls “I felt like Superman.”

At 12ˏ with Dammett’s blessing Kiedis lost his virginity to his father’s 18-year-old girlfriend. Sort of puts the slightly awkward chat loaded’s dad gave us into a more manageable context. Kiedis would mature into one of Hollywood’s more prolific swordsman squiring…

As he sits loaded down in the opulent Santa Monica hotel where our audience with one of rock’s most durableˏ and wellˏ consistently excellent bands is to be hosted. Kiedis is on breezy and reflective form. “Todayˏ I am thankful just to be hereˏ” he muses. “I’m also thankful to still be creative and making great music.”

“You are never really aware of how bad things are for you at the timeˏ” he continues. “I’d grown up with drugs and so it was quite normal and acceptableˏ but thankfully I grew up and got clean. Drugs and alcohol give you a false sense of confidence of well-being. But it’s not a reality and when you’re clean you realise that.” He stopsˏ fixes us with a look and smiles. “Althoughˏ I had lots of fun at the time.”

Part of the clan

Kiedis first attempted to quit his 15 year drug relationship after the death of original Chilis guitarist Hillel Slovak in 1988. A relapse five years later saw him fall into a freewheeling tailspin throughout most of the ‘90sˏ until rehab in 2000 led him back onto the straight & narrow. He admits it’s a daily struggle to resist the temptation (“It’s easy to be a junkieˏ” he says. “But it’s not easy to be one of the best guitarists or songwriters of all time.”) ˏ but he’s resolute in his stance since the birth of his sonˏ Everly Bear (named after the Everly Brothersˏ andˏ umˏ the fact Kiedis feels “like I’m part of the Bear Clan”) now threeˏ with ex-girlfriend Heather Christie.

“We’ve all changed so much personally especially me by becoming a fatherˏ” he says. “It affects the songs and we also have new blood in the band which has given us a fresh look at writing. We’re just ready to go out there and tour.”

Does having such a tempestuous relationship with your own dad affect the way you rear your own? “Listenˏ I feel lucky to have my son in my life. He’s a joy and I just want to be the best father I can be. It’s given me a new energy and a purpose in everything I do. Whatever… [text obscured by quote].. relationship I had with my own fatherˏ I know that he did love meˏ whatever his behaviour.”

And there’s no missing the most distinctly named bassist in the world. With his turquoise hair and matching tracksuit he dicks around on his guitar while talking at several million words an hour. Before we’ve even asked the obligatory question about the new albumˏ he’s off.  “There is a song called Ethiopia on the new recordˏ” he starts. “Did you know I got lost out there?”  It’s crazyˏ right? But I totally did.

“Damon Albarn has started his African Express Projectˏ where basically a group of musicians go to a different country in Africa and jam with Africansˏ listen to African music and trip around. It was fucking amazing. Soˏ Josh and I decided we’d go to Ethiopia. One dayˏ we got the bus somewhereˏ before I got out to check this little side road. I turned around and the bus was gone. I was totally lost. I walked around this little town for about an hour. No one speaks English there and it was kind of crazy. I started getting really scared.” He looks scared even nowˏ telling us about it.

“People were coming up to me and speaking to meˏ but I didn’t understand. I was tripping out with all these people staring at me and speaking to me. Eventually I managed to track down this guy and started screaming at him that I didn’t understand. But thenˏ I thoughtˏ hang on so I do. So he found my friends and was totally nice. I told that story to Anthony when I got homeˏ he wrote some lyrics and it became the song. To me it reflects the feelings of never letting fear dictate anythingˏ only love.”

You get a fair bit of this new-fangled reflected schtick from the Chilis these days. We’re half expecting Chris Martin to slip though the door brandishing a microbiotic tub of natural yoghurt any second. Stillˏ you can’t really blame them for chilling the fuck out. After decades of mutual excessˏ socks-on-cocks live performances and 65 million album salesˏ most expected the departure of Frusciante to put the final nail in the band’s drug ravished coffin.

Mercurially talented though he wasˏ their former guitarist endured a five-year heroin addiction in the ‘90sˏ struggled to shake his crack cocaine and booze habits before flogging his rehabbed guts into exhaustion after he’d rejoined the band in 1998.

They admit that the pressures of being on the road had a major effect on band morale. “We’d had enough of each other by the end of the Stadium Arcadium tourˏ” he admits. Flea nods. “My friendship with Anthony wasn’t a fun one at the end. We’ve been friends since we were 15 and been through so muchˏ but we needed time out.

“We see this album as something of a rebirth” he says. Suddenlyˏ Chad Smith grabs his bandmate and they grapple at loaded’s feet. “I meanˏ” he grunts between headlocks “how many bands have been through what we have and still wrestle?” loaded