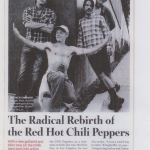 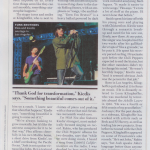 The Radical Rebirth of the Red Hot Chili Peppers

With a new guitarist and killer new LP, the Chilis Blast back into action By David Fricke

Josh Klinghoffer, the Red Hot Chili Peppers’ new guitarist, can tell you the exact day he started writing with the band: October 12th, 2009. His predecessor, John Frusciante, had already quit, although he would not make an official announcement until December. Klinghoffer has previously worked with the Chili peppers, as a sidesman on their last tour. But that day, in Los Angeles, he was playing with singer Anthony Kiedis, bassist Flea and drummer Chad Smith for the first time as a potential member.

Klinghoffer, Flea and Smith were “just jamming around,” the guitarist remembers, “when Anthony walked in and said, ‘We lost a good man today.’” Brendan Mullen, who ran the historic L.A. punk club the Masque and was a close friend of the Chili Peppers, had died of a stroke. “It was a weird way to start, Klinghoffer, 31, says- “a beginning and an end. Somehow that song came out of it.”

He is referring the “Brendan’s Death Song,” a dynamic requiem for Mullen-part acoustic, part galloping hard-rock send-off- on the Chili Peppers’ new album, I’m With You. Anthony started singing, and we started jamming,” Flea recalls, still amazed. “That was the first song for the album.” The quartet wrote most of another tune that day, a funky, dark thing laced with snaky rifting and later titled “Annie Wants a Baby.” It also made the album, which was produced by Rick Rubin and comes out on August 30th on Warner Bros.

“Thank God for transformation,” Kiedis says sitting in the living room of his Malibu home. “Historically, it’s been imposed on us, every time things seem like they can sail smoothly, something catastrophic happens.”

The singer turns and smiles at Klinghoffer, who is next to him on the couch. “I know now that when that happens,” Kiedis says, “something beautiful is going to come out of it.”

“We’re always looking to grow musically, but it’s like the universe conspires for it to be that way,” Flea affirms cheerfully in his own Malibu home, a short drive from Kiedis’, on a bluff overlooking the Pacific Ocean. “Josh is not a guitar virtuoso like John. He’s a textural guy who also plays drums and piano. But there is no person in the planet we could have gotten who was better. And he was already playing with us.”
The Chili Peppers have a 28-year history of tumult: internal tensions; drug troubles, including the fatal overdose of original guitarist Hillel Slovak in 1988; and an extraordinary parade of guitar players. The band has also matured from a raw fusion of punk and cartoon hip-hop to a rhythmically assured hard-pop hit machine that has sold more than 60 million albums worldwide. I’m With You has plenty of the Chili Peppers’ trademark funk-rock shove and swing. One track, “Monarch of Roses” had the working title “Disco Sabbath”; it’s easy to hear why.

But the album makes a shift from what Flea describes as “a led Zeppelin kind of band, with big riffs and defined parts” to something closer to the classical Rolling Stones, with an emphasis on “songs, vibe and feeling.” “Even You Brutus?” is a heavy ballad powered by dark chimes of piano and peaking with a chorus that mid-Seventies Aerosmith would envy.

I’m With You also features Kiedis’ strongest, most melodically focused singing on record. Rubin, who has produced the Chili Peppers’ albums for two decades, says that “while we were doing vocals, I heard a song from [1999’s] Californication on the radio. I was shocked by how much better Anthony was now. From the beginning of the band, he has a long way to go. He didn’t sing on the first four albums- all he did was rap.”

“This is a new band,” Smith contends, sitting on the floor at Fleas place. “We have the same name, but it’s a new band.”

It was a rough rebirth. In 2007, after a long world tour promoting 2006’s Stadium Arcadium, Kiedis, Smith, Flea and Frusciante went on hiatus. Flea, whose real name is Michael Balzary, insisted on two years. And he wasn’t sure he was coming back. “That was a thought in my head,” he confesses. “I just knew I needed to get away.” He played with Patti Smith and toured with Radiohead’s Thom Yorke. Flea also enrolled at the University of Southern California, taking courses in music theory and composition, his homework included analysing Bach fugues. “It made it easier to write songs,” Flea says. “I wrote a lot of stuff at the piano. I’d never done that before.”

Smith spent his time off with his young sons and playing with Chickenfoot. Kiedis went through a romantic breakup and cared for his new son, Everly, now three. At one point the singer was hospitalized for two weeks after his gallbladder erupted “like a grenade” as he puts it. (He spent his recovery period surfing]. Frusciante quit before the Chilis expected to end the hiatus, but the other members didn’t try to change his mind. “He wasn’t horribly happy,” Kiedis says. “And it seemed obvious Josh was the person for that job.”

Born in Los Angeles, Klinghoffer quit school at 15 to focus on music. (He is distantly related to Leon Kinghoffer, who was murdered by terrorists aboard the Achille Lauro in 1985. “He was a fourth or fifth cousin of my grandfather,” Josh says.) For the past decade, as a sidesman, Klinghoffer has worked with artists such as Beck and PJ Harvey, as well as leading his own projects. Even before he toured with the Chili peppers, Klinghoffer appeared on some of Frusciante’s solo records. “He’s not John,” Rubin says, “but Josh speaks John’s language better than anyone else, just from years of playing with him.”

“There is no question this is a beginning,” Kiedis says of I’m With You. “I know when we write mediocre stuff and when we write good stuff. And I can’t wait to play this. We’ve only rehearsed as a live band for two weeks. On Day one, I was glad we didn’t have a show that night-it wasn’t happening. But by Day 10, I was like, “If we had to do a show tonight, we could pull this off.”