Red Hot Chili Peppers feature several times in this edition of Rolling Stone (It’s the issue with Ziggy Stardust on the cover). Many thanks to Melanie for letting us know about this and sharing the scans with us. 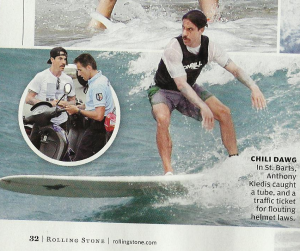 When he joined the Red Hot Chili Peppers in 2009, guitarist Josh Klinghoffer faced the
tough task of convincing fans that he was a worthy replacement for the band’s recently departed slinger, John Frusciante. This Dublin stop on the Chilis’ I’m With You tour proves that Klinghoffer is highly proficient at playing Frusciante’s complex tunes, even if he never sounds as fluid as the man himself. The set list is heavy on the group’s hit period, from Blood Sugar Sex Magik-fueled early Nineties to the early-2000s standouts on Californication and By The Way. “Scar Tissue” sends the crowd into hysterics, and Anthony Kiedis wails an impressive rendition of “Under The Bridge,” whilst still finding time to tell security to go easy on an unruly fan, forward to the end, the band plays  a jammed out cover of Neil Young’s 1969 classic “Everybody Knows This is Nowhere,” before wrapping with a frenetic “Give It Away.” Frusciante’s defection may have wounded the Chilis, but it hasn’t been a mortal blow.

The Red Hot Chili Peppers have postponed their US tour, which was set to
launch on January 20th, so that frontman Anthony Kiedis can recover from
multiple foot injuries. The frontman recently underwent surgery to remove a
crushed sesamoid bone and correct a detached flexor tendon in his foot,” said
the band. Kiedis is expected to fully recover in time for the rescheduled trek,
which kicks of March 29th in Tampa, Florida. The Chilis will also be
inducted into the Rock and Roll Hall of Fame on April 14th. The scans are for your info only; if you can buy this magazine please go out and do so 🙂 You can also subscribe to an online version of the magazine HERE