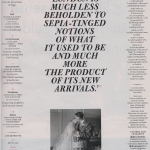 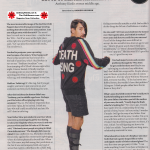 The most memorable image of the Red Hot Chili Peppers has to be of you guys onstage wearing nothing but tube socks over your penises. Can you still get away with that at 49?
The mood hasn’t struck me in some time — maybe since the ’90s — but if we were at the right place at the right time and Flea looked over at me and said, “Let’s go play this encore with socks,” I’m not above it.

You had to postpone your upcoming tour because of an injury. What happened?
There’s this weird bone that’s kind of in the ball of your foot, which I had broken in two on our “Stadium Arcadium” tour from jumping off of Chad’s drums night after night. It never healed. It finally reached a breaking point on tour in 2011 while I was sprinting after Flea in a heated game of toilet tag, and something snapped in my foot.

Hold on. Toilet tag?
It’s like tag, but if you get caught, you have to put your arm up, and someone can free you by flushing your arm.

After this incident, the doctor didn’t say: “Anthony, you’re middle-aged now. Perhaps you’d be better off not playing toilet tag anymore.”
No, no. The doctor requested that next time I play, he be invited. I think my late-40s self could actually kick my late-20s self’s butt in toilet tag.

Your father blew pot smoke in your face when you were 4, encouraged a girl he was dating to take your virginity when you were 11 and was present when you first did coke at 13. He once said, “Obviously most people are going to think I’m a sicko nutcase.” The thought did cross my mind.
It was a different era. My father rebelled ferociously against his conservative upbringing where his father physically abused him. When the ’60s came, my dad swung that pendulum so far, but it was not tempered with any kind of sense that maybe a child has to be a child. Still, we were probably closer than any of my friends and their fathers, who would come home, get drunk on martinis, read the newspaper and never engage their children. As a father now, I wouldn’t do what my dad did, because it left me feeling emotionally unstable as a kid. But he didn’t do the things he did out of selfishness or malice.

He also said: “All I can say is look how he turned out. I had a game plan, and I think it worked.” Does your dad deserve credit for your success?
For all of the things that seem difficult to accept, he also would sit me down at age 12 and say, “Here’s 10 great words that I think you should know,” or “Here’s Ernest Hemingway,” or “Here’s pop art.” His idea was: If it’s good for me, it’s good for my son.

You had major heroin and cocaine problems through the ’90s. Does he get credit for those too?
Maybe my upbringing accelerated my addiction, but I don’t hold him responsible. People always want to blame somebody else when it comes to addiction. It’s like when Whitney Houston died, everyone was like, “If she had never met Bobby Brown, she wouldn’t have that problem.” I disagree. I think people either have that in them or they don’t.

What’s your deal with women? You’ve said you’re fearful of ending up a serial womanizer like your father. But when you left the mother of your son, she said, “I really hope he finds what he’s looking for.”
Ten years ago, I would have said I’d be in a relationship for a long period of time, but as I sit here today, I wonder if maybe I will go the way of my father. Four years into the life of my son, I realize I’m so in love with him and he’s so in love with me that if I don’t find that lifelong partner out there, it’s O.K. I think I’m still figuring out how to be a little less selfish. I’m probably not long-term-relationship material for now.

What should we make of a fireplace you once built that had a grate shaped like a vulva and nipples made of violet-colored glass?
The very first time you get paid, it’s like: “I can make anything I want! I can have a fireplace in the shape of a nude woman!” The fireplace was meant to be a sculpture, not a symbol of my relationship with women. But 20 years later, when you put it on those terms, I guess I have to own it. I have to laugh at myself.