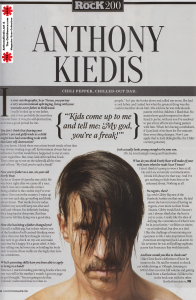 In your autobiography, Scar Tissue, you portray a very unconventional upbringing, living with your wannabe actor father in Hollywood.

I really looked up to my father, and it was probably the most free I’ve ever been. It was pre-self-destruction, so it was a good period for me.

You don’t think that sharing your father’s pot and girlfriends as a child might have had something to do with that later self-destruction?

Er, you know, I think there was a time bomb inside of me that was always waiting to go off. Environment always has an influence, but that would have happened to me at some point regardless. But, man, kids still read that book. They come up to me on the sidewalk all of the time and tell me: “My God, you’re such a freak!”

Now you’re a father to a son, six-year-old Everly Bear.

As far as I know it’s just the one child. He was born right after we came off a tour, which was cosmically very correct. Being a father is the coolest trip I’ve ever taken. I live out in the country. I wake up to my son each day, go surfing and think about music. That works for me today. I believe my son will keep me alive and well and vibrant. I’m definitely looking for a long haul at this point. But then I’ve never felt like dying was a good idea.

How else has being a father changed you?

I’m still a selfish pig, but it does relieve you of the burned of self-centred thinking more often than not. My first thought every day now is: go check on my son and make sure he’s happy. It’s a great relief. A little boy telling you he loves you or holding his body next to yours, those really are the highs that have no comedown.

Which parenting skills have you been able to apply to being in a band?

Patience. I started reading parenting books when my son was still in his mother’s womb. I got one page in and thought: “I’m not going to do this. I already understand how to relate to people.” So I put the books down and called my mom. She had a cool father, and I asked her what the greatest thing was she could remember about him. She told me he was ridiculously patient with his children. I liked that. No matter how quick-tempered or short-fused I can be, with my son I’ve resolved to put all of my efforts into being patient with him. When he’s having a meltdown, if I just kind of sit there for five minutes then everything changes. Now I can apply that to Josh [Klinghoffer, the Chilis’ current guitarist].

Josh actually looks young enough to be your son.

What do you think Everly Bear will make of your wild years when he reads Scar Tissue?

I don’t think it’s going to worry him at all. He and I are extremely communicative. I think it will always be that way. And I’ve got nothing to hide from him or be ashamed about. Nothing at all.

I go with Gibby Haynes of the Butthole Surfers on that one. He laid down the law in terms of having no regrets, even more so than Frank Sinatra. Gibby would kick Sinatra’s ass. I always think that the best is yet to come. I really like the idea of defying the convention of what it is to be in your forties-or fifties or sixties- as an individual, but also as a dad. I like the challenge of maintaining my openness to life. I take inspiration from [American strongman] Jack LaLanne. In his seventies he was still pulling tugboats across San Francisco Bay with his teeth.

I like Chris Rock’s definition of how he wants to die He said he wanted to check out while driving at 150mph, listening to NWA’s first record at full volume and getting head from a Kardashian. I’d like to be in the back seat with the other Kardashian sisters. PR