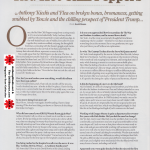 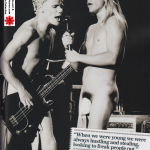 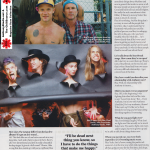 Anthony Kiedis and Flea on broken bones, bromances, getting snubbed by Bowie and the chilling prospect of President Trump…

Once, the Red Hot Chili Peppers sang about scoring smack in LA’s nocturnal underbelly. Today Anthony Kiedis and Flea welcome Classic Rock to more salubrious digs, in the well-heeled beach city of Malibu. Even after 33 years together they make an unlikely yin/yang, the thoughtful frontman contrasting with the bassist’s goggle-eyed mania. Yet both are committed to the survival of this band, and think The Getaway their eleventh album, represents a return to form.

You could argue that the Chili Peppers are due one. The loss—for the second and presumably final time—of linchpin guitarist John Frusciante hit them hard, and 2011’s I’m With You came and went with little fanfare. Now, produced by Brian Burton (aka Danger Mouse) and splicing their trademark funk-rock motifs with loops, strings and left-field sound effects, The Getaway is the sound of a veteran band putting their balls on the line. “I love the fact that we took the risk and it paid off,” Kiedis says.

Flea, had you not broken your arm skiing, would this album have been out earlier?

Flea: It would’ve been, yeah. That took six months off the process. I really thrashed my arm — it broke in like five places. I have this big bump now, a screw. Feel it. See, it’s metal. It was really scary, cos there was a while that I didn’t know I’d ever be able to play again. But I can, so I’m happy about that.

So no more skiing from now on?

Flea: Oh no, I already went again. Snowboarding. I have to keep moving. I’ll be dead next thing you know, so I have to do the things that make me happy.

Why did you cancel your KROQ Weenie Roast gig in May?

Anthony Kiedis I tell you what, as a band we do not like to cancel a show. It’s the last thing in the world we want to do. I drove all the way, after not sleeping for twenty-four hours because my guts had basically seized up and I was white as a ghost and feverish. I still made the two-hour drive from my house to the venue, cos I was going to stand there like a ghost and sing these songs and let Josh [Klinghoffer, guitar] and Flea carry the party. And my nurse was there and she’s like: “We’re going straight to the hospital.” Turned out to be the right choice, because by the time I got to the hospital I could not stand.

You being rushed to the hospital was all over the news. It was like, ‘Lemmy, Bowie, Prince… is Anthony Kiedis next?‘

AK: Some day I’d love to join David Bowie on his cloud, circling whatever planet he’s circling. That would be a great place to end up. But I’m not even close to going there.

Flea: He was such an integral part of all our childhoods. I mean, he’s the guy that showed that pop music could be intelligent and dynamic and musically adventurous and it could change and grow. There’s never been anyone with a career like his. No one. And that string of records from the late sixties all the way through the eighties was just amazing: Hanky Doty, Ziggy Stardust, Aladdin Sane, y’know, Lodger, Low, the Berlin records. Incredible, man. What a beautiful, beautiful man.

Is it true you approached Bowie to produce By The Way and Stadium Arcadium, and he turned down both?

AK: Yeah. And he wrote us extremely thoughtful, kind letters explaining why he couldn’t — whether he was busy or just into something else at the moment. But a true gentleman, not a guy who just blows you off without an explanation.

So why The Getaway? Is that after the Steve McQueen movie?

AK: Yeah, kinda inspired by the movie. I always liked the title, I always liked Steve McQueen. And the song speaks to that moment of being with somebody and escaping for a moment, and having that kind of unity while listening to music in a car in an untouchable place.

Flea: I like the feeling of motion, of moving forward. And in terms of the word ‘getaway’, like any image, and any word, and any music, it can mean a million different things to a million different people. I always think of getting away as getting away into the sacred place that you have, like your sanctuary, whether it’s inside or wherever it is. It’s good to be aiming for a place of peace and harmony, y’know?

Is this the beginning ofa new era for the band?

AK: Definitely. It’s difficult changing band members, and when John left after the Stadium Arcadium tour, Flea and I always intended to carry on. So we got Josh, who is infinitely talented and hard-working. But that first record was us just getting to know each other. We had the same experience with John. In 1988 he joined, we made a record in eighty-nine, and it was not our most classic record: Mother’s Milk. It’s good, ifs decent, it’s respectable, but it’s not as good as the next record we made with him, which was BloodSugarSexMagik. So I feel like this is the BloodSugarSexMagik of Josh’s existence in the band.

Working with Danger Mouse is quite a departure after twenty-five years with Rick Rubin. Did you feel the need to change?

AK: We did. And it wasn’t like Rick was the problem, but it was a bit comfortable, and sometimes you have to get uncomfortable to find your deeper self. And we were at that place where we were ready to take a risk and get uncomfortable working with someone we didn’t know very well, who we knew had a very different process, and it turned out to be a beneficial thing for everybody. We also just needed a new element, and he has a different recording technique than Rick. He adds a different take on sound, and a different instrumentation and loops, and a slightly more mechanical vibe that blends well with many forms of music, including rock’n’roll.

Apparently you were quite shocked when he rejected the first bunch of songs you presented him with.

AK: It wasn’t a resentment, because he did it in such a way where it wasn’t arrogant or a put-down. It was more about: “I have very specific tastes, and I’m going to tell you what I love and the rest I don’t care about.” That’s his approach. He’s not trying to work on songs that he thinks are okay, decent, or maybe have something, he wants to work on the ones that he feels are top-shelf blue-chip, classic. And he’s not afraid to tell you when he doesn’t vibe with something. Which is huge.

How does The Getaway differ from the last few albums? It’s got an airy sound…

AK: This feels like one of our better records in a very long time. And, yeah, there is space in there. But it’s also very dimensional and Josh is really a beautiful backup singer. It gives it a full sound. Y’know, I like a song that also stands up with just a cardboard box and an acoustic guitar, so I want to be able to play all of these, even if it’s just a cappella somewhere. I don’t want to be beholden to instrumentation, but I think these songs hold up in the raw as well.

Is the song We Turn Red about paranoia? Barack Obama was called a socialist, Bernie Sanders is named ‘Red Bernie’, and that’s something most Americans seem to be alerted by.

AK: It’s a look at America. And red is a multi-faceted metaphor, so yeah, you have the socialist aspect of that, but you also have the blood aspect of that. And this is a country that has typically profited greatly off of war and the loss of life and blood, but at the same time it’s the country of so many people’s dreams.

It’s both beautiful and corrupt at the same time. And that song speaks to the dichotomies we have here.

How scary is the idea of Donald Trump becoming President?

AK: He’s not a likeable person. He’s a cartoon of a person. He says very unrealistic things about Muslims and race in general that make no sense at all. Because people are just people, y’know? Good and bad in all race and all religion. But sadly the real conundrum is that Hillary [Clinton] is not any better. She is just as much of a tyrant.

Flea: It’s terrifying. And the thing that’s so crazy to me is all the people that love him. Like, I understand they’re frustrated with politicians and the political process, and they’re unhappy. But why is this guy, who was born wealthy, who his whole life… he’s shown clearly that all he’s ever caned about is getting as much money and power for himself, and he’s never cared about anybody. So why do these people think he would care about them?

Let’s talk about the heartbreak songs. How come they’re so open?

AK: I don’t try to cover them up. There’s tons of heartbreak on this record, and that is what I benefited from two years of a very difficult relationship — I got a record out of the deal.

Flea, how would you describe your relationship with Anthony now?

Flea: Well, my relationship with Anthony is intense…

Didn’t you meet over an argument?

Flea: Oh, in the beginning. I was fighting this other kid, and he came to say: “Leave him alone.” But… I love Anthony. I’m in love with Anthony [chuckles]. He’s my soulmate, y’know? What can I say? It’s like we’ve been friends for so long, and we keep doing this thing together. It’s amazing.

What do you guys fight over?

Flea: Everything! [laughs]. What don’t we fight over? But actually we’re much better now. We used to fight a lot more, and be angry, but we’re grown up and we’re able to talk about things better now.

When you started out, you were both exposed to LA’s booming music scene.

Flea: Yeah. And, y’know, seeing the punk-rock scene in LA at the time was wild. And experiencing all that, going on tour for the first time, and drugs, and everything. But it’s also the stuff when we were young and we were always hustling and scamming and stealing and looking to freak people out.

Flea: Yeah, that being one of them. I can’t remember whose idea that was!”

The Getaway is out now via Warner’Bros.