Checking In With Anthony Kiedis 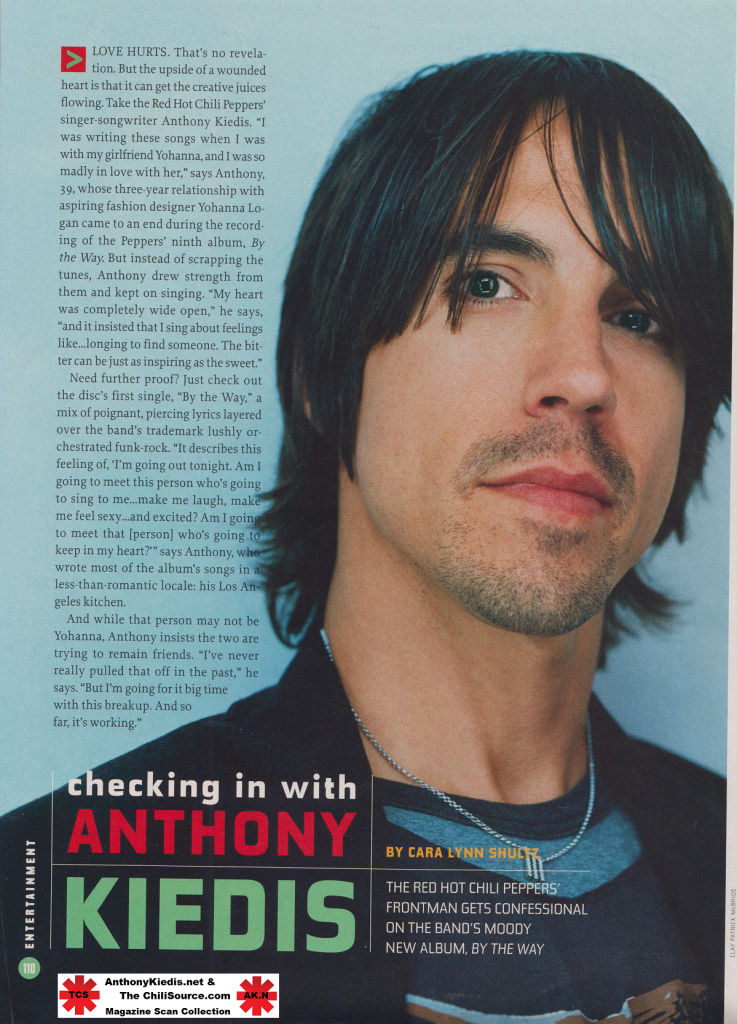 Checking in With Anthony Kiedis

Love hurts. That’s no revelation. But the upside of a
wounded heart is that it can get the creative juices flowing. Take the red Hot
Chili Peppers’ singer-songwriter Anthony Kiedis. “I was writing these songs
when I was with my girlfriend Yohanna, and I was so madly in love with her,”
says Anthony, 39, whose three- year relationship with aspiring fashion designer
Yohanna Logan came to an end during the recording of the Pepper’s ninth album, By The Way. But instead of scrapping the
tunes, Anthony drew strength from them and kept on singing. “My heart was
completely wide open,” he says, “and it insisted that I sing about feelings
like… longing to find someone. The bitter can be just as inspiring as the
sweet.”

Need further proof? Just check out the disc’s fist single, “By
The Way,” a mix of poignant, piercing lyrics layered over the band’s trademark
lushly orchestrated funk-rock. “It describes this feeling of, ‘I’m going out
tonight. Am I going to meet this person who’s going to sing to me…make me
laugh, make me feel sexy…and excited? Am I going to meet that [person] who’s
going to keep me in my heart?’” says Anthony, who wrote most of the album’s
songs in a less-than-romantic- locale: his Los Angeles kitchen.

And while that person may not be Yohanna, Anthony insists
the two are trying to remain friends. “I’ve never really pulled that off in the
past,” he says. “But I’m going for it big time with this breakup. And so far,
it’s working.”

UPDATE: I emailed the author of this, Cara Lynn Shultz, and she very kindly replied telling me she thought this interview was conducted for Teen People magazine. She also told me how nice AK was and that it was a telephone interview that had to be conducted at 5a.m. her time as Anthony was travelling and it was the only time he was free. Thank you to Cara Lynn for the info.

One Response to Checking In With Anthony Kiedis