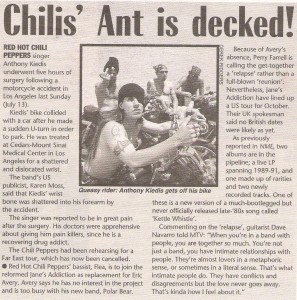 Kiedis’ bike collided with a car after he made a sudden U-turn in order to park. He was treated at Cedars-Mount Sinai Medical Center in Los Angeles for a shattered and dislocated wrist.

The band’s US publicist, Karen Moss, said that Kiedis’ wrist bone was shattered into his forearm by the accident.

The singer was reported to be in great pain after the surgery. His doctors were apprehensive about giving him pain killer, since he is a recovering drug addict.

The Chili Peppers had been rehearsing for a Far East tour, which has now been cancelled.

Red Hot Chili Peppers’ bassist, Flea, is to join the reformed Jane’s Addiction as replacement for Eric Avery. Avery says he has no interest in the project and is too busy with his new band, Polar bear. Because of Avery’s absence, Perry Farrell is calling the get-together a ‘relapse’ rather than a full-blown ‘reunion’… (rest about Jane’s Addiction).

One Response to Ant Decked