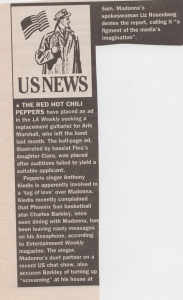 THE RED HOT CHILI PEPPERS have placed an ad in the LA Weekly seeking a replacement guitarist for Arik Marshall, who left the band last month. The halfpage ad, illustrated by bassist Flea’s daughter Clara, was placed after auditions failed to yield a suitable applicant.

Peppers singer Anthony Kiedis is apparently involved in a ‘tug of love’ over Madonna. Kiedis recently complained that Phoenix Sun basketball star Charles Barkley, once seen dining with Madonna, has been leaving nasty messages on his Ansaphone, according to Entertainment Weekly magazine. The singer, Madonna’s duet partner on a recent US chat show, also accuses Barkley of turning up “screaming’ at his house at
5am. Madonna’s spokeswoman Liz Rosenberg denies the report, calling it “a figment of the media’s imagination”.