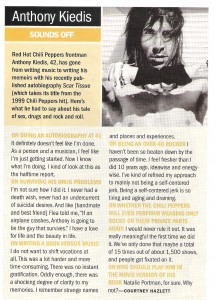 Red Hot Chili Peppers frontman Anthony Kiedis, 42, has gone from writing music to writing his memoirs with his recently published Scar Tissue (which takes its title from the 1999 Chili Peppers hit). Here’s what he had to say about his tale of sex, drugs and rock and roll.

ON DOING A BIOGRAPHY AT 41 It definitely doesn’t feel like I’m done. As a person and a musician, I feel like I’m just getting started. Now I know what I’m doing. I kind of look at this as the halftime report.

ON SURVIVING HIS DRUG PROBLEMS I’m not sure how I did it. I never had a death wish, never had an undercurrent of suicidal desires. And like (bandmate and best friend) Flea told me, “If an airplane crashed, Anthony if going to be the guy that survives.” I have a love for life and the beauty in life.

ON WRITING A BOOK VERSUS MUSIC I do not want to shift vocations at all. This was a lot harder and more time-consuming. There was no instant gratification. Oddly enough, there was a shocking degree of clarity to my memories. I remember strange names and places and experiences.

ON WHETHER THE CHILI PEPPERS WILL PERFORM WEARING ONLY SOCKS ON THEIR PRIVATE PARTS AGAIN I would never rule it out. It was really meaningful the first time we did it. We’ve only done that maybe a total of 15 times out of about 1,500 shows, and people got fixated on it.

ON WHO SHOULD PLAY HIM IN THE MOVIE VERSION OF HIS BOOK Natalie Portman, for sure. Why not? –Courtney Hazlett