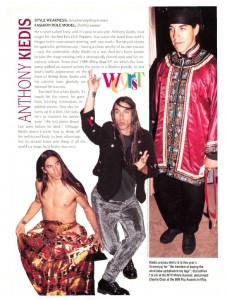 STYLE WEAKNESS: Just about anything he wears

He’s never called Tony, and it’s easy to see why. Anthony Kiedis, lead singer for the Red Hot Chili Peppers, has taken the band from rock’s fringes to the mainstream wearing, well, not much. The bicycle shorts he sports for performances- bearing a chest worthy of its own encore-suit the undeniably dishy Kiedis to a tee. And he’s been known to take to the stage wearing only a strategically placed sock, and his numerous tattoos. From their 1988 Abbey Road EP, on which the four-some walked au naturel across the cover in a Beatles parody, to last year’s buffo appearance on the front of Rolling Stone, Kiedis and his cohorts have gleefully undressed for success.

Too bad that when Kiedis, 31, heads for the street, he goes from fetching minimalism to addled excess. One day he turns up in a skirt, the next he’s in trousers he swore were “the last pants Bruce Lee wore before he died.” Offstage, Kiedis doesn’t know how to show off his well-toned body to best advantage, but he should know one thing. If all the world’s a stage, he’d better stay on it.