AK in The Simpsons

“The Simpsons is one of the greatest television shows in the last 15 years, and I love Matt Groening’s work.  I was so happy he came along and knocked all these hokey family sitcoms out of the water.   So when they asked us, it was a no-brainer.  Their animation style doesn’t go for realism.  You get the big fat over-hanging lip and one or two recognizable traits; they also got our tattoos upside down and backward.  But I give them an A for effort.” Kiedis; Penthouse January 2002

The Red Hot Chili Peppers were featured on the cult TV series, The Simpsons. Anthony Kiedis, Flea, Chad Smith and then guitarist, Arik Marshall  all guest star as themselves in the final episode of the fourth series. They also perform ‘Give It Away.’ It first aired on 13th May, 1993 in the U.S. 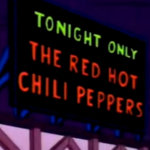 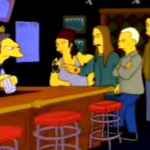 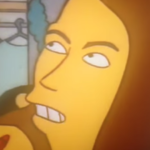 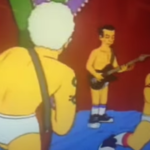 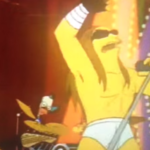 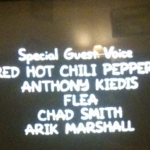 Screen shots (Sorry awful quality using an iPhone and a VHS video but better than nothing for anyone who hasn’t seen it. I hired a holiday cottage one year on an island off the south coast of England. Bizarrely, it not only had a video player but there was one VHS tape of The Simpsons and it just happened to be the one which featured this episode. I’d never seen it before).

Sometimes the full video surfaces on YouTube but it usually gets pulled down quickly on copyright grounds.

A  brief video of RHCP The Simpsons episode featuring the song Give it Away: