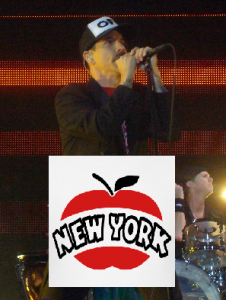 Anthony Kiedis and RHCP to play US next year

For those of you asking about US Tour dates and a chance to see Anthony Kiedis live, Flea was asked about concert dates for RHCP in New York during a Q & A session on Twitter yesterday and he replied that the Red Hot Chili Peppers would be playing the Big Apple early next year (2012).

Lots of people asking about n.american tour dates..we will announce them in december. Thanks for your patience..stay tuned! (Thanks to Venice Queen for the heads up!)

And for those of you who like voting and want to support Anthony Kiedis and RHCP there are a couple of online polls featuring the band right now:

Red Hot Chili Peppers have been nominated for induction to the Rock ‘n’ Roll
Hall of Fame along with several other artists and there is an online vote for
fans to indicate who they would like to see inducted from the nominee list. RHCP
are currently coming second to Guns N’ Roses. Vote in the Hall of Fame Poll HERE

One Response to Anthony Kiedis with RHCP Updates