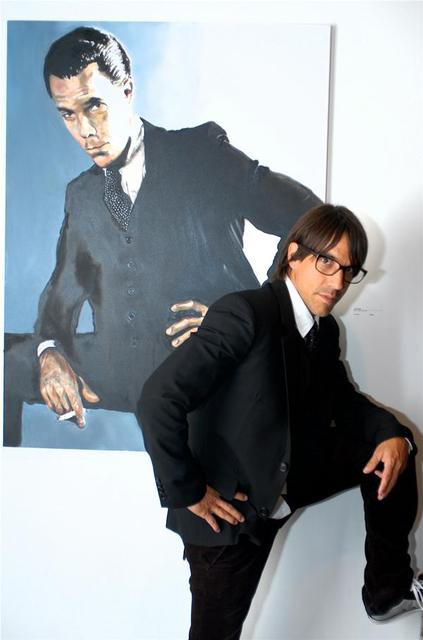 In case you don’t know Blackie Dammett is AK’s father and he’s been writing an autobiography which is due to be released later this year; attached is the press release.

January 18, 2012—Beverly Hills, California: You may wish you had some of that evil 1980s Sunset Strip cocaine too when you can’t put this book down til dawn—it’s immersive, exhilarating, exhausting, elegiac, ribald…and hilarious. It’s simply the biggest, boldest epic of Hollywood and Rock & Roll ever written.

John Kiedis—AKA Blackie Dammett—the Hollywood Babylon Renaissance man whose mind blowing exploits and relentlessly lurid lifestyle shaped his future Rock & Roll Hall of Fame son—between the torrent of drug and sex-fueled parties, auditions and business deals in Hollywood, New York and London. Dammett towed the young pre-Red Hot Chili Pepper on his nefarious adventures that included the Hillside Strangler and getting married to do The Newlyweds game show on ABC just to crack into the biz.  Father and son even studied acting together with the inimitable Lee Strasberg.

Along the way Dammett worked as a writer at MGM and later made a lengthy career acting in high profile movies and television working with directors like Richard Donner, Francis Ford Coppola, John Frankenheimer and Sam Peckinpah, everything from a “misunderstood junkie hypochondriac suspected child kidnapper with a soft side” to “a failed Hell’s Angel.”

Then there were the “girls.” OMG. Nobody could make this stuff up—there’s just too many. Blackie made Gene Simmons look chaste.

Fasten your seatbelts—it’s going to be a humpy ride.

From John Lennon and Harry Nilsson’s wild weekend with their posse at the Rainbow that ended up at Liza Minnelli’s party for Sinatra in Beverly Hills to an unusually contrite Lennon, temporarily exiled from NY by Yoko Ono and lubed with coke and whiskey, pouring out his legendary heart to Dammett.

This is Blackie Dammett’s story—the man who has had a profound, ineffable influence on his son, Anthony Kiedis, front man of the seminal band that climbed to the Olympian territory of Los Angeles’ Buffalo Springfield, The Doors, The Byrds, Eagles and the Beach Boys—and  now the recent induction into rock history.

And the entire book is ghost-writer free—every single word is Blackie Dammett’s.

From his Lithuanian ancestors landing at Ellis Island (with some Algonquin and Mohican blood mixed along the way), to Blackie’s classic youth in 1940s and ‘50s hardscrabble Michigan (an almost Norman Rockwellian American Graffiti), to his hilariously depraved Hollywood of the 60s through the 90s, his story is the story of America in the second half of the twentieth century—an epic, authentic cultural document without equal in detail, profound candor and heart.