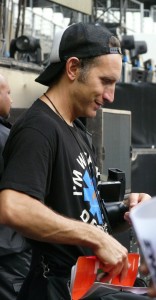 As many of you know, photographer Dave Mushegain has been travelling around with the Red Hot Chili Peppers on their tour in support of the ‘I’m With You’ album meeting with RHCP fans and taking photographs of them to include in a new book celebrating RHCP’s  fans throughout the world. The book is about to be published and is called ‘Fandemonium’. As well as the photos by Dave Mushegain and accounts of 50 of the most devoted fans of the band, there is a forward by Anthony Kiedis. The book is due out in November and can be pre-ordered at most major online book sellers. 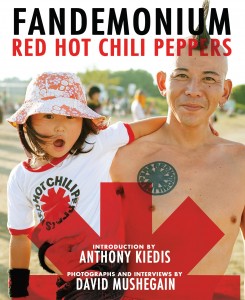 There will be two book signings with Anthony Kiedis to promote the book. One will take place on November 17th at Barnes & Noble, The Grove in Los Angeles  and the other at Barnes & Noble in Union Square, New York on the 21st November. Both events take place at 7 p.m. and the New York date also features Anthony Kiedis in conversation with David Fricke who writes for Rolling Stone magazine. 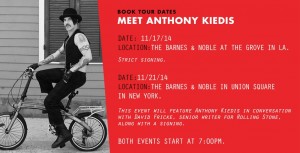 A video featuring Anthony Kiedis to promote the book has also been  released:

More can be found out here at the official Fandemonium website including sample layout pages, photos and a fan photo of the week section which currently features my online friend Henrik who I had the pleasure of meeting a couple of times at concerts: 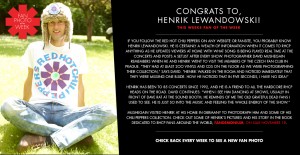 Fan Photo of the Week: Henrik