Extracts from an interview with Anthony’s nephew, Jackson, have been featured in this article: 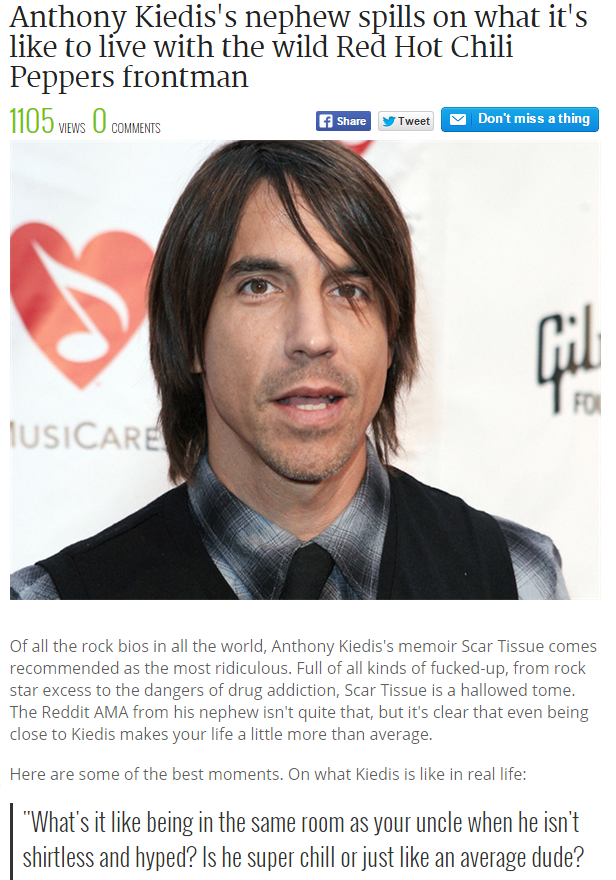 “What’s it like being in the same room as your uncle when he isn’t shirtless and hyped? Is he super chill or just like an average dude? Also, has he offered to give you lessons in anything?”

“He is definitely more subdued than he is on stage, though that doesn’t necessarily mean his shirt is always on. He doesn’t know much more than a few chords on guitar, so I haven’t gotten any lessons from him, but I do see him as a huge inspiration for my own musical endeavors. He got me drums and a bass once for christmas.”

On his uncle’s pals:

“Do you have a relationship with anyone else in the band? Like Chad, Flea, Josh or John?”

“I kinda just answered this but yeah. Flea especially, as he’s still my uncles best friend. They are all amazing people. When I was a kid, I loved the wild thornberrys and would always ask flea to do the donnie voice once I found out it was him. He obliged every time but did it more halfheartedly every time. haha.”

“How often do you see.. Uncle Blackie aka Anthony’s father?”

“Blackie… I haven’t seen him since RHCP got inducted into the hall of fame. I used to see him every couple of months, his house in Michigan was crazy. He had a giant skull collection lining the walls of every room and an unlicensed wolf named Shiva. Everyone in my small hometown knew someone that knew Blackie. He got around quite a bit.”

On the Kiedis scent:

“Years worth of BO. Its kind of charming in a weird musky way though.”

On the Kiedis family Christmas

“Although it has been a few years since we’ve celebrated Xmas together, they would always be great. He would take on the role of Santa and pass around presents to people. He also always had the best gift ever”

On dancing in the streets:

“So I’d like to ask how did Mr. Keidis create his dance moves? Like honestly those are one of a kind moves”

“I have no idea but I completely agree- and they aren’t restricted to the stage either. Any time we pass buskers on the street and he’s feeling the music, he will whip out his crazy spin moves. He sometimes runs into passersby too. Actually this one time last summer in a tiny Michigan beach town there was this old school country singing busker. My uncle asked if he knew Why Don’t You Love Me Like You Used To Do by Hank Williams(which RHCP covered). The busker knew it and my uncle sang harmonies with him. too cool.”

Many thanks to everyone who confirmed that this is genuine!