Smoke Rings, I Know You’re Going to Blow One… 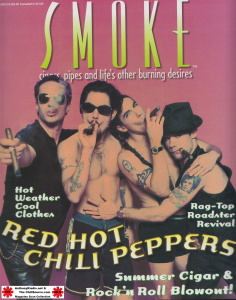 As you probably know by now, I collect magazines featuring RHCP. I have my list of ones I’d really like and there were two magazines on the ‘holy grail’ list for me… I saw one of them for sale for the first time about a month ago but the postage was a rip-off and I reluctantly let it go; but then a week ago, I saw another posting for it which was a lot cheaper and I had to get it!

It arrived this morning so I’ve just scanned and uploaded it – there’s also a full transcript. I don’t think many people will have seen it before as it is pretty rare (why I’ve mentioned it here although it’s uploaded on The Chili Source as the article features the whole band).

Smoke: Don’t let the magazine title put you off; I really wanted it as it’s so rare and one of those iconic magazine covers but I thought the content would be very limited given the publication- I was very wrong! There are a few photos of the band with cigars and a few references to smoking them but it’s mostly a lengthy article talking about working with, then new boy, Dave Navarro and One Hot Minute.