I’ve spent the way watching Red Hot Chili Peppers’ videos- such a hardship! But it was all done for research…

I’ve been meaning to update the page on Anthony’s tattoos for ages as the information was very general and I wanted to see if I could find more specific dates for each of the tattoos but it was hard to find such information.. Then one day, I was watching a video and thought AK has no tattoos there and realised that videos might be the best way to get the information I wanted. Hence the massive video fest today! I can see RHCP onstage if I close my eyes as I’ve watched so many!

The tattoo page has now been completely re-written with dates for every tattoo that Anthony has- some are more specific than others but each one is tied down to within a year/a few months. Every tattoo has a photo and I’ve added any other information about each tattoo that I have e.g. quotes from books/magazine articles. The historian in me (my day job!) has made sure that everything is cross-referenced with links to back up the dates I’m suggesting. 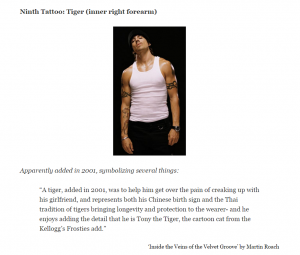 I learned something totally new today too! I’d always assumed the tattoos were added in pairs as the two Indian chief tattoos were added consecutively so I thought the dagger and the arm band pairs were done likewise. Found out I was totally wrong on that assumption!
View the new post HERE

This entry was posted in Anthony Kiedis, Kiedis Tattoos. Bookmark the permalink.