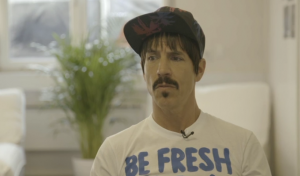 A brief article and short video interview of Anthony Kiedis ahead of RHCP’s concert tonight at Roskilde Festival can be seen  HERE.

But in their new and 11th studio album ‘The Getaway’ garden group needs a new input to move forward, says lead singer Anthony Kiedis as DR meet the star at the Roskilde Festival:

– We were looking for a kick in the ass, a little bit of development, says Anthony Kiedis.

Therefore they got the innovative musician and producer Danger Mouse as a producer. Instead of Rick Rubin, who otherwise faithfully produced the Chili Peppers discs ago, the big breakthrough ‘Blood Sugar Sex Magik’ in 1991.

Got a quantum leap in music

And Danger Mouse quickly became a kind of new director and created new creativity for the band, says Anthony Kiedis in the interview, you can see above:

– We invented things on the spot. And he took the parts he liked without us experienced it first. We came to nothing, and if we liked it, we used it, says Kiedis on the new album, which has earned at least decent reviews in the international music press:

– We got a small quantum leap in our musical development.It feels good.

This entry was posted in Anthony Kiedis, The Getaway. Bookmark the permalink.