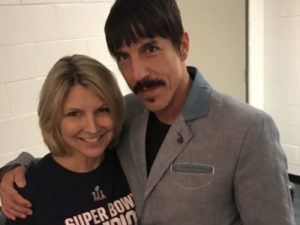 Anthony Kiedis was interviewed by Amy Brooks for ALT 92.9 radio station. You can hear the interview in the link and there’s a brief background article to accompany it:

Radio interview article (interview is at the bottom of the page)

I’ve added a transcript below- if anyone could help with the couple of things in red, I’d appreciate it!
Transcript:

Amy Brooks: It’s Amy Brooks in Boston and I’m so glad to be here backstage. Really been a fan of yours since the ‘80s coz I’m old enough to be. First of all, I saw you at U&H (?) in like 1990. Can you remember back that far?

Anthony Kiedis: Umm… Gosh. Was it an outdoor show?

Amy Brooks:  It was an outdoor show at the Quad. How do you remember these things?

Anthony Kiedis: Because they just come floating back to my mind. Yeah, I remember the show. Very hackey sack oriented crowd. Yeah

Amy Brooks: I’m afraid so. I was in that crowd. Yeah.  Yeah. So, question, how on earth, after all these years and all that’s changed, [can you?] continue on now that it’s 35 years later?

Anthony Kiedis: It’s easy. Yeah. It’s fun and I love it and I have a team; I don’t have to do it by myself. And nature has been good to me and you know, I’m full of life and love and happiness and I just want to rock. And I’m impressed that Boston still has a rock radio station.

Amy Brooks:  Thank God, yeah, right. We’re here for you, for sure. And we like the Red Hot Chili Peppers on this station because we play you so much.

Amy Brooks:  And when was the first time you ever heard a song of yours on the radio? Since we’re talking about the 80s.

Anthony Kiedis: Yeah, it was in the 80s. I was driving past MacArthur Park in downtown Los Angeles and Rodney On The Rock played ‘Fight Like A Brave’ off of our third record. And before that we had only ever been on college radio. That’s who we were. We were college radio people. And then I heard us on commercial radio and I was just stunned. I couldn’t believe it. And I just still get the same way when I hear us played on the radio. I’m like, ‘I can’t believe we’re on the radio right now!’

Amy Brooks: You’re saying, ‘Why are they playing that song? Maybe they should be playing this song?’

Anthony Kiedis: No. I’m just happy to hear a song on the radio. I can’t listen to the song for very long, but I like to make a mental note that it’s out there. We’re in the air.

Amy Brooks: You’re seemingly old school in that because, you know, that’s kinda how it started.

Anthony Kiedis: Yeah. I think people still secretly love the radio because that’s a moment you have to yourself when you’re, lately, in your car, or you’re going to work or you’re going to a friend’s house, or you’re going on a road trip or whatever; you’re in the car with the radio. And of course, people have their playlists and all that, as well, which is wonderful but sometimes you just wanna go searching to see what’s out there in the air. And it’s still fun. People love it.

Amy Brooks: So we’re, you’re in a superbowl town…

Anthony Kiedis: Is that true? I had not noticed.

Anthony Kiedis: They had the parade in front of my hotel today.

Amy Brooks: I was going to ask you about that.

Anthony Kiedis: We were on the parade route.

Amy Brooks: So I said this on the radio today; I said, just kinda as like, you know they’re looking out their window right now, the Red Hot Chili Peppers, out of their hotel window; no idea where you’re staying. Umm, and they’re going, ‘look at this city, it’s out of control.’ The craziness, the confetti. I mean is there confetti in your shoes, in your sneakers?

Anthony Kiedis: No, but it’s stuck on my window and my son was just mesmerized. And really, the parade was kinda my favourite thing about the whole extravaganza. Umm, obviously that’s not my team. It shouldn’t be my team coz I don’t live anywhere near here, but I was so happy for the happiness. I looked at the people hugging each other; you know cops hugging strangers and I was like, ‘OK. This is a good thing.’ This town is like full of beautiful people that need joy and then they just got their blast (?) of joy there and that was beautiful I celebrate the celebration.

Amy Brooks: We have something for you… You may not wear it.

Anthony Kiedis: No, I’m not wearing that! I would never wear that. I’m a Laker man.

Amy Brooks: I know! I know. [Talking about the Celtics and Lakers and number of wins they have each] …

Anthony Kiedis: Just so you know…

Amy Brooks: … He’s awesome. You played the Superbowl with Bruno Mars. Three years ago? You didn’t see it did you?

Anthony Kiedis: I saw what I could. I was on the tour bus and my reception was in and out but I watched.

Amy Brooks: Artist to artist, how do you think she did? You know, I like seeing Lady Gaga at a piano, singing her heart and lungs out and it’s mindboggling, you know, how, what a beautiful musician she is.  So hardworking and talented, she’s clearly put in the years at the piano. I love it. I’m not that much for the whole song and dance thing. It’s just not my cup of Superbowl tea. Clearly she was entertaining the masses and that was her job and I think she succeeded with flying colours. No pun intended. But I like her best at the piano, just sitting there…

Amy Brooks: Versus the whole song and dance and the whole number, the whole performance that it is?

Anthony Kiedis:  Yeah, yeah. Well, she does well at both. We played a charity event with her once so our dressing rooms were side by side and she was just through the door and I heard her warm up for hours. My warm-ups sound like three crows are dying in the next alley and her warm-up just sounded like the goddesses had come back to earth to serenade the humans. She just sings so well.

Amy Brooks: What is it like, what is it? 215 million people that are gonna view you; you know,  Superbowl’s a different venue than like getting up and playing even an arena like this, so what’s the kind of pressure?

Anthony Kiedis: Pressure it is the same whether you’re playing in the laundromat or whether you’re playing in the superbowl. My favourite thing was when you got there they said, ‘nobody can touch this field. This field is golden. Nobody can get near the field,’ and I just kept running as fast as I could right up the middle of field and Chad picked up a ball and hit me, like 40 yards down the field but the touchdown pass, and I just kept running because when, like, whenever are you going to get an unguarded chance to touch down on the Superbowl field? And it was so fun. Really the pressure of playing; it was just fun. Like I’m in a band so like the pressure is diluted. I count on everyone and we do it together. You want a little bit of pressure. You want some butterflies; you want some nerves; you want some adrenaline. Maybe a little of throw up in your mouth and you’re ready to go.

Amy Brooks: So you were 2008’s Most Beautiful Person, vegetarian. Most beautiful, from PETA. Did you know that? [Muttered reply]. It was a long time ago. So I wanted to know, as a vegetarian myself, what made you decide to want to become a vegetarian.

Anthony Kiedis: OK. So I have experimented with all different varieties of eating in my life and for many, many years I was a vegetarian and for a couple of years I was a vegan and it was because of a girlfriend that I met in the 80s who I went to dinner at her house and they served vegetarian food and I was like, ‘What is this?’ And they were all so happy and glowy people that I was like, ;OK this seems to be working for them, I’ll take it for a spin,’ and 20 years later I was still rolling with it. And you know, I’ve had some mineral deficiencies in my life and things like this from just my long, hard life and so I’ve tried eating wild game. I’ve tried eating venison. I’ve tried all kinds of different diets. You know I believe that everyone has to find what works for them. It’s attraction rather than promotion. I’m not trying to tell you what to eat but if you see me eating in a way that’s adventurous to you, feel free to ask.

Amy Brooks: So I just thought that was a funny thing. I didn’t even know PETA had a beautiful person for being a vegetarian. Whatever. So what would you say you are most proud of after all this time in the Chili Peppers; on the road, recording? Like what do you think you’re most proud of?

Anthony Kiedis:  No worries [?] That we’re still alive. You know I take some satisfaction, I don’t know if I want to call it pride, coz that does usually precede the fall. I take satisfaction in the fact that we cared with all of our beings from minute one. And we still do. You know there’s no-one in this band that doesn’t care with everything they have and that is some kind of enormous blessing. And that without ever really intending to,  we keep re-inventing ourselves and learning new things and taking risks and seeing what’s out there and honestly I can’t wait to write a whole new batch of songs right now.

Amy Brooks: Do you get inspired when you’re on the road to write?

Anthony Kiedis: You’re getting the finger?

Amy Brooks: I’m getting the finger. But I do have a socks on cocks question that I have to ask you. How? When? Why? I mean no other band’s done it. Where did that come from? Is it something you want to forget? Like is it a fond memory? Will we see this again, Anthony?

Anthony Kiedis: Its genesis. It’s kind of a long story. Umm early 80s a girl gave me a card, that was a long fold-out card and it had a cartoon of that and I thought, ‘OK. Well, if she’s being cheeky when she shows up next I’ll be dressed like this cartoon. So I put the sock on for her to come and she greeted me at the door and, you know, it was fun and the band was just starting and so I thought let’s take this to the stage and see what happens. And, it’s just another one of those things that makes you feel vulnerable and alive and like something dangerous could happen and that was who we were at that moment and so.

Amy Brooks: How did they stay on?

Amy Brooks: It’s a good way to wrap that up. Anthony, it’s such a pleasure. Thank you so much. Good luck; have fun. The tour’s been good?

Anthony Kiedis: The tour’s been amazing. Come check us out.

Amy Brooks: Oh, I’ll be there.

This entry was posted in Anthony Kiedis, Family, LA Lakers. Bookmark the permalink.