Anthony was interviewed for As It Lays (episode 26, Season 2), a few months ago, but the interview has only just been released. Full transcript below. 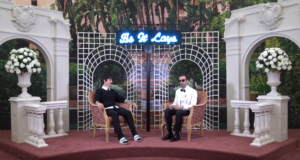 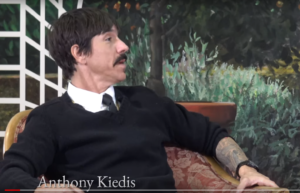 Transcript: As It Lays

Interviewer: Thank you for tuning into As it Lays. Todays’ subject is Anthony Kiedis. Anthony, thank you for being here.

AK: Thanks for having me. As It lays? Interesting choice…
Interviewer: We’ll just get started with the questions.

Interviewer: What’s one thing that you believe would make the world a better place?

AK: Umm. Just one thing? My honest answer would be kindness. My sort of self-centred answer would be music, and super-centric answer would be the air that you can breathe having just come from Cairo where the simple, taken for granted, act of breath is not an option. Let’s go with kindness. I feel like when you get to the metamorphical gates of [Saint] Peter, really all they are going to ask you is, ‘Were you kind?’ And I don’t know, maybe the whole point of this little, tiny, blink of an eye that we are here, is just to decrease the suffering through kindness and other thoughtful acts. It could be painting, it could be caregiving, it could be just smiling. That’s all.

Interviewer: Did you ever fake it until you made it?

AK: [Laughs] I like the question and I’m not against that principle, but I can’t say I did fake it until I made it; it doesn’t quite rhyme as well, but yeah, no, I always felt it until I dealt it.

Interviewer: What age would you pick if you had to stay that age forever?

Interviewer: What’s the spiciest thing you have ever eaten?

AK: What or who? [glaring stare from interviewer!] Is that what? What. I don’t tolerate spice that well, genetically a little bit intolerance of the gnarly spice kingdom, ummm… but there was an experience with a Bolivian girl in Indonesia once that was pretty spicy.

Interviewer: Is there anywhere you’ve been where you aren’t allowed back?

AK: I did get eighty-sixed from the Rainbow Bar and Grill when I was 16 but eventually, they had to lift the ban. Ummm (smiling)… It’s a true story. Er, Canada wasn’t that happy inviting me into their country for a while [throws hands into air, shrugging]. You know the most polite place on earth, and you know, they weren’t asking me to come back but [sigh], all things must pass.

Interviewer: Recently have you come to any profound revelations about yourself?

AK: Almost every day. Err… My most with my most recent revelation is, even though I’m sober I’m still a flaming addict of anything that presents itself, that goes down those subways of your brain, but at the same time, so I’ve got this powerful addiction personality inside my head, but also the ability to just say well, that’s what I am at this moment in time and I’m okay with that. Cut to Tom Hardy, has a good point about being grateful, to have snacks and be alone in your house.

AK: I would say the mothers who sing like angels while they’re doing the dishes, after having fed the five kids, in Oklahoma.

Interviewer: What takes up too much of your time?

AK: The motherfucking Internet. And all of its evil wizardry. Woo! Yeah, I don’t like the whole government Silicon Valley let’s, I mean we’re already sensitive creatures, and they just got this by the shorthairs with this technology. It’s a little maddening. But, you know. It takes up too much of my time that’s my fault.

Interviewer: What news headline would you most like to read?

AK: Oof! Well my goodness. Errmm… [Intake of breath]. I’m really thinking about this, I guess I’ll go with the aliens have landed

Interviewer: Is this something you love most about your home?

AK: What Tom Hardy said, being alone in your house with your snacks is a greatly undervalued experience and we, me, bitch and moan and complain and get all anxious and twisted and neurotic and sociopathic, and hey, I’m just home alone peacefully with some snacks. So, I like the snacks but really, of course, my roommate is my favourite thing about my house. He is 11 and we share the same last name.

Interviewer: What’s the most memorable thing for you about high school?

AK: My friends. So, I was supposed to go to University High in West LA, and I had been lying about my address the whole time I was at Ralph Waldo Emerson Junior School and I show up to high school with all of my team, my friends, my people, my little pothead squad, and they’re like, ‘Eh! You can’t go here! You don’t live when you said you lived.’ And I was like, ‘whaaat?’ and they were like, ‘Yeah, you’ve been lying to us the whole the whole time.’ I was like, yeah but okay, what about now and they were like, ‘No, you can’t come.’ So, against my will, I was forced into Fairfax High School, seems like a calamity but that’s where I met the friends, I would actually live my life with forever; the Fleas, the Hillels, the Jack Irons. So, it was a cruel twist of fate that actually opened up my entire life to be what it is today. Long winded I know.

Interviewer: Do you have any running group texts?

AK: I hate group texts. I’m a Scorpio, I like an individual discussion, a little bit of privacy. You start seeing all of these names, not for me, so no I don’t have a running group text. Every now and again then I succumb to a group text to get something done, but not for me.

Interviewer: What’s something you like to do the old-fashioned way?

Interviewer: Do we make our own luck?

AK: I would say we make a bunch of our own luck, but I would say the cosmos does deliver a blast of luck as well, and maybe we made that luck in a previous lifetime, who knows? Spin that wheel of fortune and find out.

AK: I’m dinos. I’m a dad; I lived through the re-education of dinosaur technology with my boy. It was fun, it was tangible, it was magical. And if you ever get a chance, watch a little animated dino documentary called Broken Jaw. Heart-warming.

Interviewer: What would be the most difficult thing about having you as a roommate?

AK: The most? I think I’m accidentally bossy; that would be a real pain in the ass for anyone.

Interviewer: Is there a quote that’s always stuck with you?

AK: To thine own self be true.
Interviewer: What is something you wish you could erase from memory, so you could experience it for the first time, all over again?

Interviewer: What does friendship mean to you?

AK: Well, it’s a little bit of a magical moment when you realise that you want to share a road with somebody. It’s a pretty good feeling. And a way more regular occurrence younger in life. I watch my son develop friendships, make new friends, he’s a master at it. He homes in on the kid he wants to hang out with, and they become friends, which I did as a kid myself and now it’s like, do I really wanna be friends with that guy? I don’t know if I can be friends now. The older you get, the harder it gets to make new friends. Suddenly, it’s like you’ve got friends from forever. Did I get off the subject? [laughs] I don’t know; stay young at heart when making new friends.

Interviewer: What do you want the world to know about Anthony Kiedis?

AK: Nothing. Less is more in this case. I wrote a book once and it was a big mistake. I forgot that people were going to read it, or might read it, and then they read it and I was like well what was I thinking? Why did I do that? You don’t have to know anything about me.

Interviewer: Well, that’s all the time we have for today. Thank you so much for being here.

Interviewer: And thank you for watching. Thank you [shakes Anthony’s hand].

2 Responses to Anthony Kiedis Laying it down… New Interview