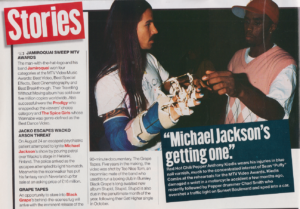 I was very kindly given virtually the entire backlog of Q magazines. I’m wading my way through them looking for RHCP related stuff and today I’ve scanned the things I’ve found so far (about halfway through the magazines). Here’s a round up of what I’ve scanned and uploaded to date:

There are a number of concert adverts which I’ve put together on one page as it’s not worth posting them separately: Concert ads page

1992 May Q Magazine (68) News snippet with photo of Anthony Kiedis and Madonna.

1994 May Q Magazine (92) Flea briefly mentioned in an article about Courtney Love: