RHCP played a very short set due to circumstances beyond their control.

There was a typhoon the day before the concert which meant the stage wasn’t installed in time and consequently, this had a knock on effect on the concert as the stage had to be completed before it could go ahead. The gates were supposed to open at 10 a.m. but didn’t open until 3 p.m. The first three bands were cancelled with the remaining bands playing a reduced set.

It seems that RHCP then reduced their set by another song as 11 songs are shown on the setlist (photo below) but people are reporting that they played 10 songs (“Go Robot” seems to have been omitted). 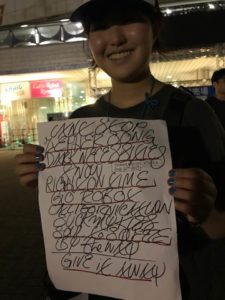 From Daniel: Riff from “Out in L.A”  was played as their opening-jam.

There are loads of fan videos on social media sites so I’m just going to select a couple to post here:

y.ooguri has some photos and a couple of close up videos with good sound (more on their story right now)

Many thanks to May Mendosa, Chifumi Soga and Daniel Tokheim Dalskau for the info from Osaka! Thanks to everyone who has shared videos on social media and last but not least, thanks also to the other witch for all of the links!