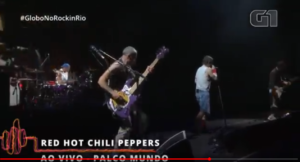 Can’t Stop
The Zephyr Song
Dark Necessities
Dani California
Hey
I Wanna Be Your Dog (by The Stooges; cover) … Right On Time
The Adventures of Rain Dance Maggie
Pea
Sikamikanico
Go Robot
Californication
What Is Soul? (by Funkadelic; cover)
Just What I Needed (by The Cars; cover)
Aeroplane
The Power of Equality
Soul to Squeeze
By the Way

***Encore***
I Don’t Wanna Grow Up (by Tom Waits; cover -Josh solo)
Goodbye Angels
Give It Away

*The concert was broadcast live.

*The setlist was leaked pre-concert to much excitement about the inclusion of Sikamikanico which saw its live debut as a gift to Josh for his birthday:

Anthony Kiedis, at the end of Sikamikanico:

“That was our gift to Josh Klinghoffer. [Thank you].  It’s his birthday; and when he was a fifteen year old boy, out in the San Fernando Valley, he got a hold of that song and that time he was a drummer, wasn’t really playing the guitar. He was frickin’ killing the skins, one skin at a time, and he learned how to play that sh*t on the drums so now, what have we got, is it 25 years later?, he’s rocking that sh*t on the guitar. Happy Birthday, Josh!”

The concert took place on Josh’s 40th Birthday. Sikamikanico saw its live debut as a gift to Josh for his birthday because it’s his favourite RHCP song.