There is a rash of fake Anthony Kiedis social media accounts cropping up at the moment (there’s also a Chad Smith one on Facebook with direct messages being sent out saying it’s the real Chad). There is currently one on Twitter a couple of people have told me about offering private meetings with Anthony himself for $2000 again through messages. The real Anthony is NEVER going to do that.

The fake account pictured below is being pushed really heavily on other fan pages (links posted by a succession of new page members with fake looking accounts) and operates on several linked social media platforms. Although there are many fake accounts in Anthony’s name, this one is portraying themselves to actually be Anthony e.g. the “official” added to the page name (anyone can do that), posting photos with family members and adding words to posts such as “me” and “my father” (accompanied by a photo of Blackie). 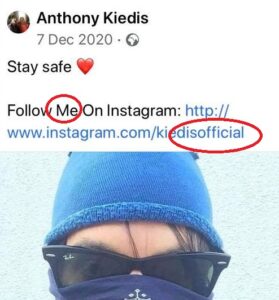 It is NOT Anthony. There is even a post on his father’s Facebook page stating it is not him. The real Anthony has no known social media accounts.

By interacting with this fake account, you could be putting yourself at risk because you have no idea who you are really interacting with and you might be putting others at risk because every like or support for such a fake account is potentially compromising people’s safety because it validates the account and people believe its authenticity more readily. Fake accounts trying to pass themselves off as real often have more sinister motives such as the Twitter account trying to get people to hand over a lot of money for a meeting or even making false promises (a little while back there was a fake Flea account which promised people VIP passes to concerts. Cue some very upset fans). This can obviously affect the reputation of the person they are imitating person so please don’t support them if you are a fan of Anthony or RHCP.

Each social media platform has its own verification mark which has to be applied for, with evidence, to make sure it is a genuine account e.g. Facebook has the blue tick/check:

My friend has kindly put together a list of the main RHCP member social media accounts which are genuine and currently active which you can view on the Facebook page connected to this group and you can always post here or message me and I will get back to you if you want to check an account.