Anthony Kiedis was a guest on the British TV program, Sunday Brunch, on Sunday 3rd April. The show on Channel 4 is hosted by Tim Lovejoy and Simon Rimmer with a relaxed format where guests are interviewed between cooking sections.

UK viewers can see the episode on Channel 4 catch-up. 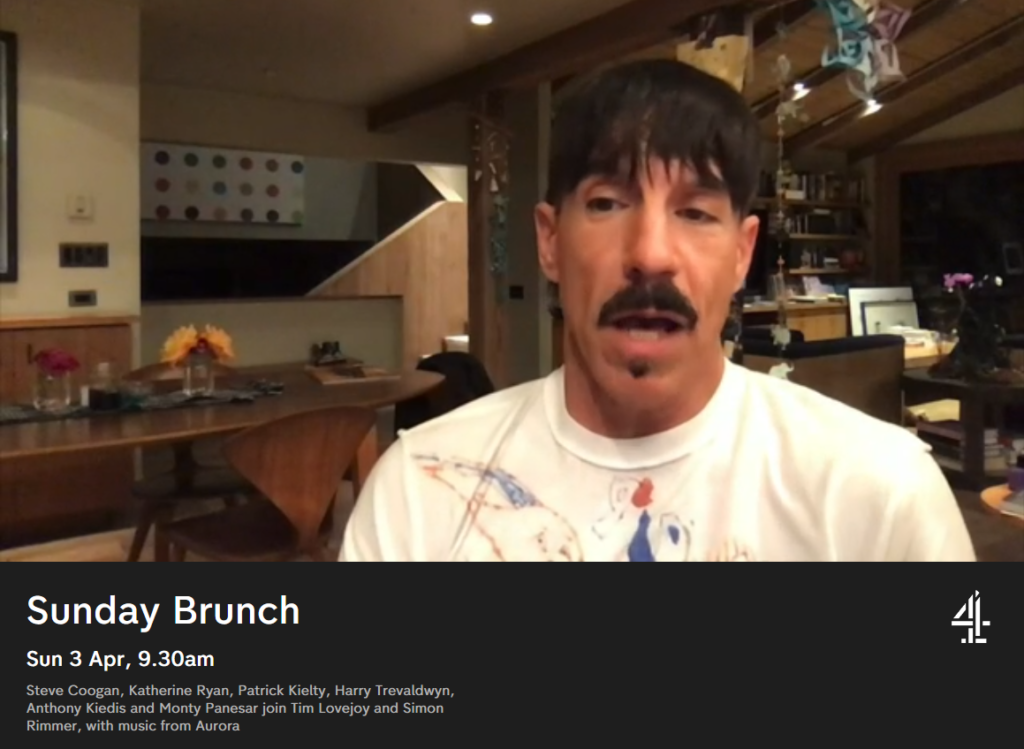 Overview and partial transcript of the show:

Anthony’s segment began with a clip being shown of TV program, Made in Chelsea. The hosts asked Anthony what he thought of it and he had no idea, before the hosts decided that nobody here knows what it’s about either.

AK: “I’m still catching up on Benny Hill.”
Hosts comment will tell him about it afterwards (not see as PC these days). Then they asked about the weather and if it was sunny in LA – comment that we Brits are obsessed with weather.

AK: “There was not a drop of sun today, but that’s OK because most days there is and I would leave this place, but I just can’t as it’s too nice.”

Hosts talk about him moving to London. [It’s clear AK has no idea of the geography of England!] AK: “If I was to relocate maybe to Sheffield… Newcastle-Upon-Tyne…”

Next the hosts talk about it being nearly 40 years since RHCP formed and AK thanks them for reminding him: “Longevity is a beautiful thing. It’s actually harder than you might think with personalities and life changes. How we’ve managed to stay together I really don’t know. Maybe it’s through sheer power of love. It’s like you can’t quit your family even though you want to; they gravitate back towards you, and I am grateful. I love these boys.”

Hosts talking about some bands wanting to quit and then realising the alternative is worse.
AK: “The weird thing is we still love doing it and we still feel a creative flow. And we’ve been blessed with a lot of curses along the way, so people leaving, things exploding and somehow it all comes back with a re-invigorated energy which is what we’re dealing with now.”

Clip of Can’t Stop shown. Asked if the band have seen so much…. AK: “It comes in spurts and waves; that’s the nice thing about being in a band. You get to write, you get to record, you get to go on tour, and you get to take some time off. Yeah, we’ve seen a lot. I like the inside of a laundromat as much as I like the inside of a stadium. Like I said, it’s a blessing.”
Hosts ask what his favourite part of RHCP’s career is. AK says about the first day the band were together and today. Then the hosts talked about the new album, Unlimited Love, and it’s cover. Then say, the band have gone backwards to go forwards and mention Rick Rubi producing and John Frusciante being back in the band.
AK: “Sometimes, there’s honestly something in the air” and how he and Flea both wanted to talk about John at the same time. “And what we both realised was that it was time to go and talk to John who had sort of re-emerged and had an interest in playing rock music again. So, we sat down with this beautiful old friend of ours who is just the perfect chemistry for us. And he said, ‘I was born to be in this band. Let’s do this again.’ And so, it began.”
Host: And what did it feel like the first time you were all playing together again?
AK: “It felt humbling and going back to square one. We didn’t want to pick up where we had left off…” talks about playing some old blues songs and early RHCP songs to become a band again “And to remember what It was to be four guys in a room together playing music and then we started writing new songs.”

Cuts to clip of These Are the Days.
Host talk about recording an insane number of tracks- up to 100.

AK: “We didn’t write a 100. That’s a glorified rumour but I like the sound of the number. We did write enough for several records. Part of it was that we were just having fun; part of it was that time became expansive in the middle of this NWO pandemic thing we were going through so we had extra time which we loved having. And I don’t know, with Rick coming back, with John coming back, we were feeling it and more will be revealed”
Host asked what happens to the songs that weren’t good enough…
A: “I would say they’re gonna be good enough when they decide to show their face. Only time we tell but we do have a plan.”

Asked AK when the band will tour and joke about the places that AK named before…
AK: “Or Slough…”
Cue much laughing from hosts (you must have been to Slough to understand how truly awful the place is!) and they joke that there’s a church hall there that the band could play in.
All thank each other…and the hosts talk about Unlimited Love being out now and that tickets are on sale for the tour.