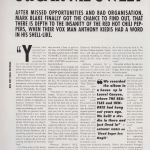 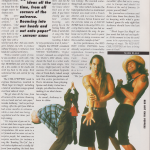 Many thanks to Kev for donating this magazine

AFTER MISSED OPPORTUNITIES AND BAD ORGANISATION, MARK BLAKE FINALLY GOT THE CHANCE TO FIND OUT, THAT THERE IS DEPTH TO THE INSANITY OF THE RED HOT CHILI PEPPERS, WHEN THEIR VOX MAN ANTHONY KIEDIS HAD A WORD IN HIS SHELL-LIKE.

You know, when you paint your-self silver it’s amazing how much smarter you become. For our next video we went into the desert and painted ourselves completely silver and our IQ’s went up by ten to fifteen points!”

RED HOT CHILI PEPPERS’ lead singer and chief raconteur Anthony Kiedis, is a man whose demeanour wavers between the deadly serious and the slightly absurd. Thankfully, his tongue never wavers too far from his cheek. And in a business dominated by umpteen Metal bands without a flicker of originality or humour between them, the CHILI PEPPERS’ irreverence comes as something of a relief.

The video in question accompanies the band’s new single ‘Give It Away‘, one of seventeen tracks featured on their latest album ‘Blood Sugar Sex Magik’. It’s the fifth release from the Hollywood four-piece (and their first for Warner Brothers), and a sparkling sensual record that coaxes you out of your surfing jams for a skinny-dip in the welcoming whirlpool of Seventies Funk.Avoiding some of the harsh, atonal sounds that dominated 1989′s ‘Mother’s Milk’, ‘Blood Sugar Sex Magik’ is both a step back towards the infectious grooves of ‘Freaky Styley’ and ‘The Uplift Mofo Party Plan’, and a step forward. Closer in spirit to the likes of PARLIAMENT than the grebo splatter-funk of FAITH NO MORE. It offers conclusive evidence that the RED HOT CHILI PEPPERS should have been born black!

It’s midday in Los Angeles and I suspect that Anthony has had to interrupt a game of pool to speak to us, but despite an irritable phone line and this early hour in the day, he’s already on form. Especially when it comes to discussing the band’s split with EMI.

“They hated us!” He states quite simply. “Except for a lady named Kim White, who worked in the alternative department. She worked her ass off for this band. But we had to assess the situation. We had four albums out, we’d been together for eight years and we weren’t getting played on the radio. Apart from Kim, I don’t think anybody else at EMI understood what we were about!

“Warner Brothers’ attitude is completely different. Their strong point is that they sign a band, let them go crazy and still support them. They’ve had a roster of quality acts from JIMI HENDRIX to JANE’S ADDICTION. They understand!”

Whereas ‘Mother’s Milk’, seemed to reflect some of the anger and fury within the band at the time, ‘Blood Sugar Sex Magik’, seems a far more relaxed-sounding record, without sacrificing some of the group’s natural power and high energy.

Check out ‘Mellowship Slinky’, or the New Orleans inspired ‘Apache Rose’, and then go back to the confused thrashing of ‘Nobody Weird Like Me’, from ‘Mother’s Milk‘.Anthony ponders for a moment: “We had some tough times prior to that record, and I guess some of that must have come out on the album. The band as it is now (Kiedis -vocals. Michael “Flea” Balzary -bass, John Frusciante – guitar, Chad Smith -drums), has been together for three years (with Frusciante and Smith joining after the death of original guitarist Hillel Slovak and the subsequent departure of drummer Jack Irons) and we’ve got to know each other really well. We have such a lot of love for each other that we’ve developed a very strong sense of musical telepathy. The key to creative success is to reach that point of relaxation where all the power can flow through you.

“We recorded the album in a house up in Laurel Canyon, where THE BEATLES and HENDRIX had hung out years ago. We built a studio in there and just lived in. We had a chef to cook our meals. There was no pressure from the clock. It was utter luxury and that’s been reflected in the relaxed mood of the record”.

Recorded without the aid of a great deal of modern studio technology, there’s also a rough, live feel to the music. Anthony elaborates: “Our favourite sounds and records came between the years of 1920 to 1978. After that a lot of music became sterile, mechanical and… not so cool sounding! We used equipment from the Seventies, Sixties and perhaps even further back, because these are warm, human songs that required a warm, human sound”.

A warm human that was heavily involved in capturing these sounds was producer. Rick Rubin, the bearded Svengali responsible for recent product from the likes of WOLFSBANE and THE FOUR HORSEMEN and RUN DMC and the infamous BEASTIE BOYS before that

“Rick and the CHILI PEPPERS met many years ago under strange circumstances,” reveals Anthony, mysteriously, “but we decided not to work together for various reasons.”

I suspect that Rubin’s involvement with the BEASTIE BOYS, and the CHILI PEPPERS’ determination not to be lumped in alongside them, may have been an issue but the singer won’t be drawn on it.

“We were mulling over our options,” he explains, “and then our paths crossed and we were both in the right place at the right time with a need for each other. Rick was intelligent, helpful and able to produce without bringing in influences from bands he’s worked with before.

“From a vocalist’s point of view, he was excellent to work with. I like to record my vocals the same way that HENDRIX did; with the lights off, a few candles in the studio and with my back to the amps. Rick understood that and catered for my needs!”

The CHILI PEPPERS’ need to express themselves, resulted in ‘Blood Sugar Sex Magik’, including a total of seventeen songs spread over four sides of vinyl.

“We get ideas all the time, from all corners of the universe. Bouncing into our heads and out onto paper,” reveals Anthony, “and we just kept writing. After the split from EMI we had seven months to rehearse while a new deal was being negotiated and the ideas just ‘- kept coming.

“It’s very wise of you not to ask me what these songs are about, because you have to make your own interpretation. We never write to a set formula and we never set out to surprise people, but sometimes we surprise ourselves, for instance a song like ‘Breaking The Girl’, has a real sixties rhythm and is totally different from anything the band have done before. For me, it’s now a sig-nature tune and one of my favourites on the record because it makes such a change.

The inclusion of “Red Hot”, written by Blues legend Robert Johnson, shows another change of direction.

“Robert Johnson was a musical genius who recorded a ridiculous amount of music while he was alive!” declares Anthony. “We recorded that song at 2.00 AM on the hill behind the house. We took Chad’s drum kit, a couple of guitars and one of those miniature amps up there and ran the leads back down to the house where Rick was at the desk. If you listen closely you can hear crickets buzzing, cars going by on the freeway below. All kinds of weird shit. A song like that required a live recording, it had to be very spontaneous to do it justice.”

Despite the CHILIS’ consistent lack of airplay, their cover of STEVIE WONDER’s ‘Higher Ground’, released as a single from the ‘Mother’s Milk’ album, introduced the band to a wider audience. And the latest single, ‘Give It Away’, might just carry on that success. It’s an almost hypnotic slice of Funk-Rock; naked except for a lean Frusciante guitar sound and the extra protection of Flea’s dexterous bass playing. Sparse and slinky it also has a simple, yet effective chorus, making it an ideal choice for a single.

As usual, Anthony is keen to elaborate: ‘Blood Sugar Sex Magik’, is a spider’s web of songs that support each other. But we were obliged to put out a single and we felt that ‘Give It Away’, could be taken out of the context of the album without disturbing the overall framework! We definitely didn’t want to put out anything too wimpy. We wanted some-thing fresh and funky!

“The video (which includes the band painted silver as mentioned before) was made with a French director, and is a cross between a 1950′s Science Fiction B-movie and the extreme Glam era of DAVID BOWIE back in the early 1970′s. It’s a very bizarre video, but one that we feel complements the song. As you know we’ve felt the need to paint ourselves on many occasions and this is another example of that!”

As live performers, the RED HOT CHILI PEPPERS have already acquired a formidable reputation. Investigate their ‘Psychedelic Sex Funk From Heaven’ video for a taster of the band’s manic splendour.

“We feel totally relaxed on stage,” announces Anthony. “It’s the perfect place for the RED HOT CHILI PEPPERS. We’ve been busy rehearsing, as the tour kicks off in October. We’ll be playing all over the States, including a New Year’s Eve show at the Club Palace in San Francisco which will be fucking incredible! After that we’re coming over to Europe and should hit Britain at the end of January. So prepare yourself Mark!”

Do yourselves a favour and don’t miss those live shows. But in keeping with what’s gone before I guess it’s only right that Anthony should have the last word! “‘Blood Sugar Sex Magik’ are four words that look real cool together. At this moment in time the world seems to be experiencing a severe shortage of magic. The RED HOT CHILI PEPPERS are here to bring some of it back!”