As many of you that post on Facebook RHCP groups already know, the UK’s reality ‘talent’ TV show the X Factor has been generating some comments, most of which are negative, thanks to a contestant called Janet Devlin (who is supposedly a massive RHCP fan) covering the Chili Peppers’ song, ‘Under the Bridge,’ as her chosen song on Saturday night.

However, the whole argument seems to have taken a new slant this morning with several reports coming in of complaints from parents and anti-drugs charities over her actually being allowed to cover the Red Hot Chili Peppers’ song in the first place because the song apparently glorifies drug taking.

(BTW I did consider whether to post this or not but it mentions Anthony Kiedis and it is in the news so is relevant I guess). 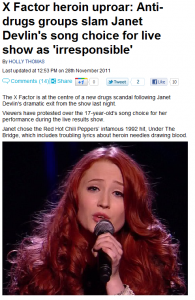 Here’s  an extract from one UK newspaper,  the Daily Mail:

The X Factor is at the centre of a new drugs scandal following Janet Devlin’s dramatic exit from the show last night.

Viewers have protested over the 17-year-old’s song choice for her performance during the live results show.

The song- which is about ex-addict Anthony Kiedis, 49, shooting up- has been slammed as an ‘irresponsible’ choice by children’s charities and anti-drugs groups.

The Sun reports that Claude Knights of child protection charity Kidscape complained: ‘The X Factor is a family show and this was a disturbing and irresponsible song choice.’

Drug charity Focus 12, which offers counseling to  addicts, has reportedly labelled the decision tasteless for a purportedly family-friendly show.

‘The producers of The X Factor have a moral and social responsibility to the millions of children and teenagers who tune in,’ raged head Chip Somers.

‘They should be smarter about song choices, particularly given recent events on the show. The recent demise of Amy Winehouse should have shown us all how tragic drug and alcohol abuse is.’

‘It is not something that should be taken lightly.’

According to The Sun an ITV spokesman has responded to the outcry: ‘We won’t know if we have any complaints about this until Monday.’

The issue is particularly poignant considering ex contestant Frankie Cocozza lost his place in the competition after admitting to snorting cocaine.

My Comment: Normally I wouldn’t say anything but I really do think the point is being missed here. Yes, Under The Bridge does include reference to Anthony’s experiences taking drugs but I think to say it glorifies drug taking and is a bad example to children is taking it too far and just another example of political correctness going too far (here in the UK). People are quick to criticise but I see there is no mention of how Anthony overcame his addiction, or of his work e.g. with MAP/MusiCares and the money he helps raise that is used to provide rehab for musicians with an addiction. ‘Scar Tissue’ (the book) anyone?!

Would be interested to hear what other Anthony Kiedis/RHCP fans have to say on this.

BTW For those of you who want to see Janet covering the song; here it is:

One Response to Anthony Kiedis/RHCP: The X Factor Row