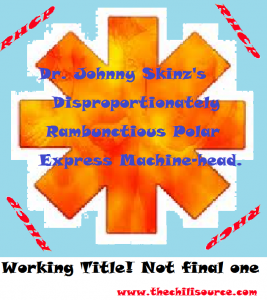 This name was recently mentioned by Anthony Kiedis in an interview; Article from SPIN magazine and is now being assumed to be the title for the new RHCP album. However, Anthony states it is a working title which will be used until the album’s real name is comfirmed:

While Kiedis won’t reveal song details, he agreed to let SPIN in on the album’s affectionate working title, inspired by a friend who dropped by the studio: Dr. Johnny Skinz’s Disproportionately Rambunctious Polar Express Machine-head.

“He was reminiscing about one of his legendary acid trips, and told us that he had been playing a sold-out show to the planets and moons, and his number-one hit was, well, that title,” Kiedis explains. “We found it so funny that we told him for as long as the album was under the radar, that that would be our nickname for it.”

This entry was posted in Anthony Kiedis, New RHCP Album. Bookmark the permalink.