Some new photos of Anthony Kiedis are out; he was photographed in a restaurant, walking along a street and getting on a motorbike with a mystery woman with brunette hair on May 22nd.  There is a screen cap of the thumbnail images released by Brunopress and some of the Isopix photos. 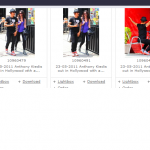 A quote from AK’s interview from Delta Airways in-flight magazine (Anthony Kiedis in Sky Delta Magazine) has been quoted in an update about Crazy Band on Fader:

Watching Crazy Band go for it feels really good, and maybe not just to me. The last time I flew on plane I read an interview with Anthony Kiedis in the in-flight magazine, and he called Crazy Band the best new thing in Los Angeles.

Anthony has also been name checked (literally just a name) in a few articles recently as an investor in Vita Coco (coconut water) as the company has been in the news since Rihanna has been named as the new ‘face’ for the company (Note: it didn’t seem worth copying them but here’s an example in case anyone is interested).

A new info page has been added of Anthony Kiedis at the Fuse Fangoria Chainsaw Awards back in 2006 with information on the event and 30 photos plus a video of him accepting the best video award for RHCP’s Dani California.

A new gallery of photos of Anthony Kiedis at the Silverlake Meal have also been added.

If you want updates on the new RHCP album and tour, please check out TheChiliSource for the latest info.

And sorry… We’ve been having a few issues with the server the website is hosted on which is why no posts have been made recently; they made a security update that knocked out the WordPress admin controls last week and currently the site is slow/showing ‘site not found’ error messages because of more issues with the server. (AK.net has not gone and I have no plans to remove it!).