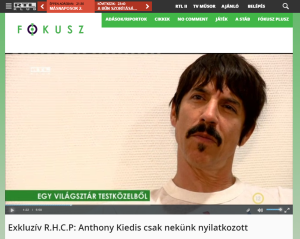 There’s a new video of Anthony Kiedis speaking to RTL Klub while in Budapest for the concert there (no embed link).

AK wasn’t sure about doing the video but decided to do so last minute according to the text accompanying the text.

Most of the time, there is a voice over while Anthony is speaking so many thanks to Csenge H for this explanation, in English, of what is being said by Anthony and throughout the whole video:

It’s about the fact that finally RHCP played in Hungary again after 20 years. It’s very rare having one full house show in Budapest but the Chilis doubled this [they played two concerts in the city]. The Chilis were in Budapest all week; they visited a Hungarian bands’ show on the first day, and everybody was shocked by what cool people they were just as they randomly hopped into a show. Anthony says that they heard the band playing from their hotel and he found them great so he decided to drop by but as soon as he arrived the show was over, so he asked the band to give him a CD.
The reporter says that she and her staff tried to reach Anthony on the street once but he said he would rather enjoy the city without the paparazzi – that’s why he did not take photos with the fans either.
The report is also about the fact that some fans were waiting for the Chilis at the door of the hotel and some of them were very lucky because one guy for instance had his guitar signed by Anthony, Flea, and Chad.
During the interview the reporter asks AK what the secret of the Chili Peppers is because generations listen to their songs. Anthony says he does not know but he is glad that they are able to reach a lot of people and hopes that they can do this for a long time. He also remembers the show they played in Budapest 20 years ago, he says they played in a wrecked state in front of very few people. The reporter heard a gossip going back to that time that AK and Flea was not good friends. AK says that he does not remember but they still compete with each other till this day. The reporter asks about another gossip that Chad was not familiar with the Chili Peppers when he went to the audition, AK says that Chad was not really familiar with their songs but it did not matter because that audition has been his most memorable audition ever. Because everyone from the band said “oh, him? no, not him with his messy hair” etc. but when Chad started to play everyone was blown out of their minds. AK also says he is not in connection with former members of the band but not because they are not friends anymore.
The reporter asks whether the band still does rehearsals, AK says, they do more than ever, and according to him a true band always needs rehearsals. The reporter asks why he hates taking photos with people, AK says he does not really like taking photos but he likes people, their smiles, the conversations and the moments. He believes that you don’t need a photo to prove that a particular moment actually happened. In spite of the fact that AK was clear that he is uncomfortable about taking pictures, the reporter asks him to take a photo with her.
The other stuff mentioned in the video are just basic info about the band e.g. like the new album, video clip, etc. and interviews with the fans about how great the band is.