UPDATED: Translation of the Swedish voice-0ver has been added.

Earlier today, we posted a snippet of Anthony Kiedis speaking about 9/11 during an interview to Swedish TV. A longer video of that interview has come out and it seems to be the complete interview this time.

Anthony Kiedis: I was certainly saddened, not in a patriotic way but in a humanitarian way. Like, ugh, why are people doing this to other people? [Anthony Kiedis shakes his head]. It’s just too much, you know. I mean, I’m sure America was partially responsible for that and I’m sure some other very people in other places of the world were responsible. It was just a sad day for Planet Earth. For everybody and it still is, you know.

‘Under The Bridge’ Plays for a few seconds leading to a clip of some live footage and another snippet of this time of, ‘ Give It Away’ with a voice-over in Swedish:

It has been 25 years since the Red Hot Chili Peppers got their big break, and since then they have supplied a steady stream of hits and played to sold-out arenas around the world, yesterday they played in Stockholm. The early career was marked by a hard rock star life with drug problems and everything could have ended there.

Anthony Kiedis: There is an energy that comes with inexperience and the energy is really intoxicating but it’s also a little bit dangerous and you couldn’t do that forever because you would just explode. I guess it’s turned out that it’s more of a marathon than a sprint. So as you are around longer you figure out ways to run the marathon, you know and not kill yourself before it’s over.

Voice-over in Swedish over some live footage of RHCP – the presenter says:

Red Hot Chili Peppers have throughout their long career taken a position on political issues and this spring they had a gig to raise money for Bernie Sanders primary election campaign. With him gone, so does Antony Kiedis have much sympathy for presidential candidates Hillary Clinton and Donald Trump?

Anthony Kiedis: Too much attention is given to these people that aren’t necessarily doing something for the good of the whole so it’s disheartening but I do not read anything about it.

The Red Hot Chili Peppers are in the midst of a year long tour and they enjoy being on stage.

Anthony Kiedis: It’s kinda like levitating; it’s a little bit on the levitating side because suddenly it requires no effort. It just sails along. You know when everybody gets into that same invisible stream of energy and sound, it’s a very euphoric feeling. We love our job and we feel very grateful; remind us never to complain about anything. 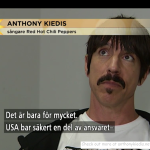 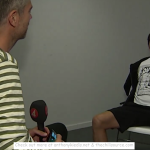 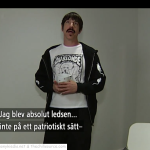