Anthony Kiedis was interviewed for a feature on Los Angeles for Delta Airlines in-flight magazine for their last month’s edition. 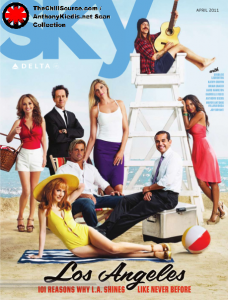 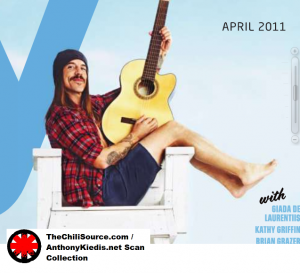 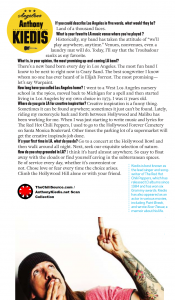 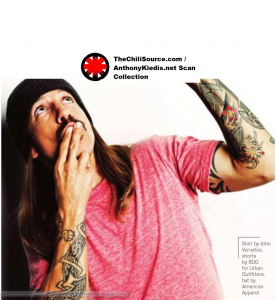 If you could describe Los Angeles in five words, what would they be?

Land of a thousand faces.

What is your favourite LA music venue where you’ve played?

Historically, my band has taken the attitude of “we’ll play anywhere, anytime.” Venues, nonvenues, even a laundry mat will do. Today, I’ll say the Troubadour ranks as my favourite.

What is, in your opinion, the most promising up-and coming LA band?

There’s a new band born every day in Los Angeles. The most fun band I know to be next right now is Crazy Band. The best songwriter I know whom no one has ever heard of is Elijah Forrest. The most promising-let’s say Warpaint.

How long have you called Los Angeles home?

I went to a West Los Angeles nursery school in the 1960s, moved back to Michigan for a spell and then started living in Los Angeles by my own choice in 1973. I was 11 years old.

Where do you go in LA for creative inspiration?

Creative inspiration is a funny thing. Sometimes it can be found anywhere; sometimes it just can’t be found. Lately, riding my motorcycle back and forth between Hollywood and Malibu has been working for me. When I was just starting to write music and lyrics for The Red Hot Chili Peppers, I used to go to the Hollywood Forever Cemetery on Santa Monica Boulevard. Other times the parking lot of a supermarket will get the creative inspirado job done.

It’s your first time in LA, what do you do?

Go to a concert at the Hollywood Bowl and then walk around all night. Next, seek our exquisite selection of nature.

How do you stay grounded in LA?

I think it’s hard almost anywhere. So easy to float away with the clouds or find yourself caving in the subterranean spaces. Be of service every day, whether it’s convenient or not. Chose love or fear every time the choice arises. Climb the Hollywood Hill alone or with your friend.

(All images are clickable through to a larger image;)

Thank you to Cheryl for the heads-up on this!