In the unfortunate hiatus caused by Anthony’s operation, I’m using the time to update things and catch up- I’m currently working through my massive magazine collection and trying to either scan everything or re-scan earlier articles as I’ve now got a better than scanner and can make higher resolution images which are larger… I want to get every magazine online in some form by the end of this month- fingers crossed!

While I’m doing this, you might notice that the ‘Magazine Articles/Scans’ section is changing as I update scans or add new ones. I will also sort out ordering so scans run in chronological order throughout each section once everything I have is online and I can do that. 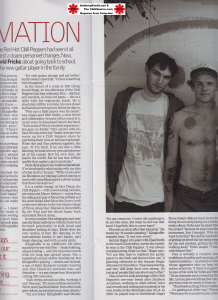 Sunday Independent Life Magazine– a long feature (although it seems to be a re-working of an interview that came out last year but it’s interesting all the same).

Kiedis is sitting in the living room of an antique cabin on a hilly estate overlooking the Pacific where he is staying with Everly. Flea’s house is nearby; he and Kiedis both love to surf in these waters. Road Trippin’, on the Chili Peppers’s 1999 album, Californication, was written about one of their surfing holidays here.

“I get up when he gets up,” the singer says, describing a typical day at home with Everly. “I have breakfast with him, but I don’t make it. He has a nanny. My job is to tell stories to him while he eats. And he is demanding about his storytelling. If I try to get away with a
short one, no. We’re talkin’ full-length.”

Puzzles, reading, drawing and “backyard hide-and-seeking” usually follow. There is no television — the kind with “commercials and noise”, as Kiedis puts it. He and Everly watch “1930s animation together, a lot of films. But when he walks into a room where the television is on, he walks right by.”

Kiedis, who lives in Malibu, reserves a couple of hours every day for surfing. (Two years ago, after he was hospitalised with a gall-bladder crisis — “It literally erupted like a volcano inside me” — Kiedis spent his recovery riding waves.) He calls his current dating life “pretty much nonexistent”. As for marriage, “I don’t feel like I need it. Being a single parent is golden.”

People are free to leave any comments on here but for those of you who use Facebook, a friend of mine has set up a best wishes page which some of you might want to join; link here: Get Well Soon Anthony Kiedis Facebook Page