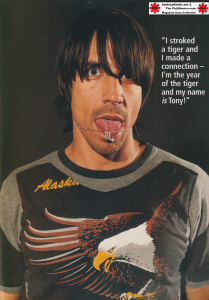 I stroked a tiger and I made a connection- I’m the year of the tiger and my name is Tony!

I’ve seen scans of this photo many times and often wondered where it came from because it was clearly from a magazine. I thought I’d either got just about every back issue magazine from the UK going or had least seen the cover if I didn’t actually own it, featuring Anthony Kiedis as part of my RHCP magazine collection so I had a bit of a surprise the other day when a special 2002 ‘end of year’ edition of Kerrang! magazine popped up for sale on eBay with AK on the front…

Of course, I had to buy it! The magazine arrived today & inside was this photo as part of an extended feature on the Red Hot Chili Peppers who’d been voted ‘Kerrang! Band of the Year’ for 2002.

As well as being on the cover, Anthony Kiedis wrote the foreword and there’s a large picture of him to accompany it, there’s the two page article on Anthony featuring this photo, a page where RHCP are named as band of the year PLUS a six page article detailing the band’s year with information, comments by band members (especially by Anthony) and loads of photographs. Enjoy! 🙂