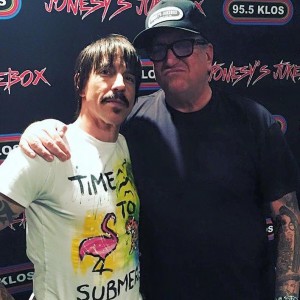 Anthony Kiedis was interviewed on 95.5 KLOS today (the interview has just ended as I’m writing this) on a show called Jonesy’s Jukebox.

There’s a short video from the interview on Facebook from the radio station.

This is a brief paraphrase of the interview- the best I could do with my typing skills! Will leave it here even though full interview is out now in case anyone finds having a written version easier to use.

[Details from my friend who was messaging me on Facebook but I didn’t see it!]

During the first couple of minutes, Anthony’s microphone was quiet, so they were trying to fix that and then Anthony told a funny story about being at the doctor’s office last week and that the two young male nurses told him he looks exactly like Sonny Bono. Anthony said, “I know I have the moustache, but that’s about it!” And the interviewer told him he doesn’t see the resemblance either, and that he looks more like Cher to which Anthony was something like: “Yeah, you should see me in a body suit, then it really shows.”

He also asked Anthony if he works out and he said no, that he just runs, surfs and has a 8 year old son who keeps him in shape

From when I joined… [Another friend called me on Skype and was playing it online from her car radio! I then saw the other messages one of which had the link and swapped over!]

Anthony Kiedis was discussing getting his Harley worked on and how he borrowed a BMW bike while it was happening and that he “can’t get off it now”. A discussion about the actual bike type (said like a police bike but they couldn’t agree on the type)

Talked about Todd Rundgren (produced a song that was played which led to the conversation) leading to a weird chat about phrases you could use in place of words. They mentioned The Beatles/ George Harrison I think and ‘Yellow Submarine’ (zoned out at that point as I HATE that song and all things Beatles as a result of its awfulness blighting my childhood!!!). Think he might have said Everly Bear liked it. Then Anthony Kiedis told a story about Henry Rollins squeezing the sweat out of his songs after being on stage into a cup to drink…. Asked if did the same with his underwear… AK said he might squeeze out Blondie’s underwear! And said yes to doing it with Joan Jett if he got the chance. Then lead into a chat about Siouxsie Banshee (can’t remember the details as the interviewer was droning on….)

[Songs; now caught up and sat writing this down]

Talking about the guitarist on the song… played with Bowie. Led to Bowie chat; Kiedis “phenomenally grateful” that he “had him as part of his experience.” Talked about Bowie smoking; interviewer asked Anthony if he smoked and he said he gave up about 15 years ago (interviewer said did the same about the same time using hypnosis and Anthony Kiedis joking that the hypnosis must have worked for him as well and it was free). David Bowie was one of his all times favourite and he was lucky to meet him a couple of times. Said asked him to produce for RHCP a couple of times but he always “respectfully declined”. For 2 minutes they would be heartbroken and then he would hear Chad Smith play drums and he would get over it. Asked Bowie to produce for ‘By The Way’ and ‘Stadium Arcadium’. But his mate Emo has said no 8 times…

Interviewer asked if they fancy a change of producer this time? “We always fancy a change. Feel like we owe us something new.” They had chat and decided to try to someone from Gnarls Barkley…. Dangermouse. Asked about how the album was progressing and replied, “we’re in the home stretch. I sung yesterday”. And that he now has a week off. “I love the experience; it turned out to be the sickest love.” We had written 2 dozen songs before we got into the studio with Dangermouse and thought we were all set but he wanted to write some more and they decided to humour the new guy and ended up writing all new songs. Do you like the process of recording and touring and recording? Anthony Kiedis said at a certain point he gets so sick of being on tour and wants to go home and write… and then wants to go out on tour with the new album. “Beautiful cycle and I’m grateful for it”.

Talking about the show sponsor (a law firm) and if real.

Bernie Sanders… (seems to be the point of Anthony Kiedis being on this radio show- so he could promote their concert). Anthony Kiedis said that in the beginning of the presidential candidate madness (then his phone rang and he explained how he hates ringing phones and normally has it on silent but he’s got problems with the settings right now) stood out as being “honest, likeable and human” so they decided to do a benefit if he made it far enough and he did hence the show on 5th February. It’s being held in an old movie theatre attached to the Ace Hotel and will hold about 1500. Is it a fundraiser? Anthony Kiedis said they offered to pay for the hotel costs but Bernie said no as he doesn’t want to be beholden to anyone. Anthony Kiedis doesn’t think Sanders is in it for personal gain. Saying they think it will be a miracle if he wins as corporal America doesn’t like him. Asked if they think the actual president makes a difference under the current system- Anthony Kiedis said not overall. Interviewer asks. “Let’s say Hilary Clinton, would she be called the ‘Presidentress’?” (as in actress). So discussing that- saying cool to have a woman as president but that he prefers Bernie to Hilary personally. Talked about a movie (missed title but Anthony Kiedis not seen it). Then talking about Montsanto- saying they passed a law saying they would never be held accountable and got it passed. Then back to female world leaders (naming a couple) before chatting about the place the winner of a competition came from.

[Song: Univerally Speaking by RHCP …and another one by T Rex)

Mentioned the songs played; RHCP song Anthony Kiedis said “ Not familiar but alright” J Then talked about a couple of festivals they are playing and Stevie Wonder playing them- people preferring Stevie Wonder to RHCP. Anthony Kiedis said they covered one of his songs, called him up and asked him to come down to the video- started cursing like a truck driver in his beautiful accent! Then chatting about swearing. Interviewer asks “The show Californication and your song; what came first?” Anthony Kiedis said their record and that it was annoying. Thinks should have just run it past the band but they let it go. And then they started to come out with CDs called Californication which they didn’t think was “friendly” and then they “squashed the beef [?]”. Talking about the interviewer being a producer and in Californication himself and then it wrapped up.

Many thanks to Angra and my other friend for their help tonight!