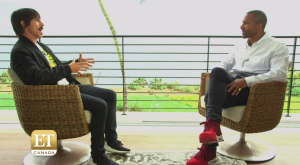 ET Canada released an interview with Anthony Kiedis a few days ago (it can be seen HERE with full transcript) and have now released the interview in a slightly different form. Snippets of the original interview have been interspersed with live clips of  the Red Hot Chili Peppers performing to make a news style article rather than presenting it as a straightforward interview. An additional part of the interview has been included with the new presentation that wasn’t included in the original release.

The new Anthony Kiedis article can be seen HERE

Anthony Kiedis: I push pretty hard sometimes and I do take my health forgranted at a certain level because I feel strong. But every now and then the body’s like, “you’re doing something wrong and you either fix it or we’re going to let you know about it.” My body let me know I had to change my ways a little bit.
Voice over: His recovery is all part of a much tamer lifestyle now his eight year-old son is a role model to look up to.
Interviewer: How’s fatherhood changed you?

Anthony Kiedis: He’s a gift to me. You know he’s the gift to me. Being around him I feel like I get more than I give. it’s changed me in a way that I’m fuller now.