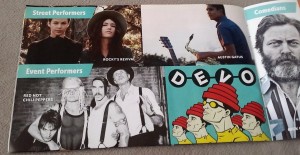 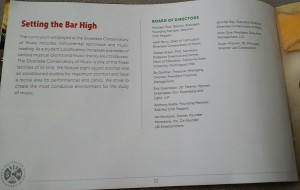 Program from last nights benefit gig which featured a short set by the Chili Peppers as part of a fundraiser hosted by Will Ferrell and RHCP’s own Chad Smith. Anthony Kiedis is listed on the Board of Directors for the Silverlake Conservatory of Music and there’s a photo of the Red Hot Chili Peppers

Transcript: Page 12
Setting the Bar High
The curriculum employed at the Silverlake Conservatory of Music includes instrumental technique and music reading. As a student’s proficiency increases examples of various musical idioms and music theory are introduced. The Silverlake Conservatory of Music is one of the finest facilities of its kind. We feature eight sound proofed and air conditioned studios for maximum comfort and have a recital area for performances and clinics. We strive to create the most conducive environment for the study of music.

I’ve only included the bits relevant to Anthony Kiedis here but the whole program can be seen here on my RHCP website.

Many thanks to Angra for this!